On Thursday, October 4, 2007, Ramy suggested that the following day might be exceptional and was trying to flush some birds into the air. Shannon Madsen, Mike Mayo and Bill Brown signed up right away but I wanted to check the forecast first. It looked good, but based on satellite images, a little drier than the media forecasters were touting. Distracted by last minute issues at work, I neglected to notify the group that I would also be coming out.

The next morning was overcast but calm in the east bay but with broken heavy clouds to the east. Cloud cover was rapidly changing by the time I arrived at the field. I don't remember why but it seemed to take forever to get ready to launch. Eventually, just before noon we were ready, with Shannon taking off first and releasing at 2000. I followed, imprudently getting off at 1400 in what seemed a great thermal. That cost me about 20 minutes of milling around the pattern before I blundered into some real lift. I watched Ramy take off in the meantime. That was last time I saw him until he landed. I was hoping that the lift would be good to the east, enabling a flight down the east side of the valley but I soon abandoned that dream, as I struggled to get above 4000 under unpredictable clouds near Stockton.

Ramy had apparently started off to the north and it sounded like Shannon was heading that direction, reporting 4500 near Brentwood. Returning to Discovery Bay, north now looked much better so I followed the leaders. Turning slightly west at Rio Vista and on to Nut Tree the lift was well marked and strong. My lowest point on this leg was 3000 at Nut Tree. Very heavy cloud cover extended over the length of the ridge east of L Berryessa so a track east of the ridge seemed more comfortable. Enroute, there had been a lot of chatter about who was going for the Egg. Up to this point I just entertaining the thought but finally I concluded that since conditions were so good, it would be a shame to pass it up. Not having been this far north, I started to consult the sectional. This entailed considerable bouts of folding, re-folding, PIO’s and blue words. As it turned out, only the heading and distance were useful at this point, since Williams was too far to make out any landmarks.

My track took me over a range of low hills to south of Williams, gradually losing altitude. Near the north end of this range, I was down to 2000 and still hadn't identified which town was the target. A fellow pilot informed me that the town near the orchards was Arbuckle, not Williams. The orchards were quite numerous, interspersed with what appeared to be cleared fields. These "fields" were of particular interest as I was getting quite low. These later turned out to be very unfriendly vineyards.

Eventually, I found some lift that would allow a final glide to the next town I pressed on. Increasingly more uncomfortable about the distance to my intended touchdown point, I re-consulted the now mangled sectional. Williams lies just south of the point where the railroad and interstate 5 turns due north and it was now apparent that I was heading for the next town up the road, Maxwell. Tuning back to Williams, I was now desperately searching for the field. Fortunately, a local pilot heard my queries and helped out. Even at 1200ft the strip was difficult to see.

After an uneventful landing, one of the towpilots helped move the ship clear of the runway. After hurriedly exiting, I made haste to empty my personal ballast tank. It is most unwise to consume large quantities of coffee before a long flight. Relieved of several worries I was now inclined to relax, wander about and check out operation. Rex, however, strode out and handed me the Egg. Explaining the forms and logbook, he helped me push out to the line where a waiting towplane had magically appeared! It was around 3 o’clock and I should have been thinking of the return flight. The tow turned out be quite interesting. Ether the tow pilot managed to stay in lift during the straight out climb towards the ridge or they had filled the Pawnee with rocket fuel. The vario stayed pegged most of time. Density altitude may have played some part, but whatever the reason the tow to 4000 was exhilarating and short. The rapid ascent enabled me to find a good thermal just south of the field. Where was it earlier when I needed it?

The return track retraced the one taken north but with much better conditions. Cloud bases were over 8,000 with the vario frequently pegged. With a slight tailwind, progress was rapid. It still seemed better to go east of the main build up looming over the ridge. A slow thermal at 4000 between Dixon and Nut Tree gave me enough altitude to arrive at Rio Vista. It was here that I saw the only other glider enroute. Mike Mayo in E5 pulled in 2000ft below, but couldn’t connect with the lift. Arriving a little earlier and higher, I was able to reach the booming street spanning the delta which Ramy just reported leaving. The final glide to Byron was over quickly.

Since it looked like only Ramy and myself were the only ones with Byron made, I landed at around 5pm and waited for Ramy, who was relaying messages. Shannon had landed at Tracy and Mike eventually at Rio Vista, so we decided to tie down the gliders instead of de-rigging, in order to speed up the retrieves. Shortly, light rain and the setting sun resulted in a rainbow which Ramy, with his cell phone camera, took several shots of it and the egg being held triumphantly aloft. 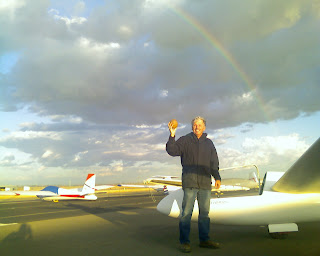 The iconic Hangar One at Moffat Airfield, originally built to house airships, is in danger of being torn down. The Navy is currently considering its options for the hangar, which is not currently in use. The cheapest option would be to simply tear it down. More information about the hangar, and the movement to preserve it, here.