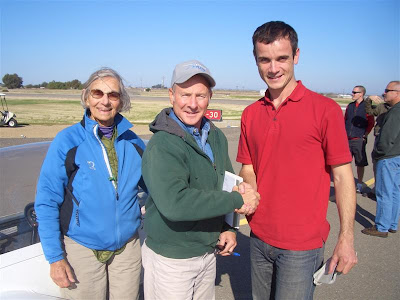 We have a new CFIG in Byron, a Frenchman called Tristan Duplan. Tristan started his flying dreams as an airplane pilot at the nearby San Jose airports and quickly transitioned to taildraggers at Aerodynamic Aviation, (then Amelia Reid Aviation), where he teaches airplane. He now has an Airline Transport Pilot license with privileges to fly land and sea planes. Born in France, he relocated to California in 2000 as a software engineer working for Cisco Systems. Tristan has always been interested in expanding his horizon in the flying world and as such started developing interest in flying gliders. After being introduced to the soaring basics in the south bay with friends, Tristan decided to start flying gliders at Byron in May 2009, got his commercial glider add-on license 3 months later and his instructor glider add-on license soon after that.


He is also part of the tow pilot crew at Byron. Over the summer 2009, he was able to experience some of the Sierra soaring weather at Minden including wave flying under the watchful eye of Michael Schneider and Michael Voie, got his self-launch endorsement from Rolf Peterson in the Grob 109B at Byron and kept training with Monique Weil at Byron. He looks forward to the 2010 training camps and more safe cross-country flying. He is now part of the CFIG (glider instructor) crew at Byron and looks forward to flying with you.
No comments: