TRACY AND TIGER COUNTRY (AT LAST!)

TRACY AND TIGER COUNTRY AT LAST

After all the stories I have read from the “uber pilots” who regularly fly the magical convergence from just West of Tracy on to the South, I was finally going to get my chance to taste (only a small taste mind you) what they kept raving on about.

The NCSA Board approved Tracy tows for the weekend of Saturday March 21st and Sunday March 22nd.  Saturday was to be my day and Larry agreed to give me the airport orientation and approval to fly SS from Tracy.  Bill Levinson kindly offered to ferry SS from Byron (C83) to Tracy (KTCY).  The forecast was promising and showed thermals with cumulus and a convergence line south of Tracy.
I met Bill and Larry at Byron and we discussed our plans.  Larry towed Buzz and Maja from Byron to Tracy to reposition the tow plane (76W) to Tracy for our day of fun, and afterwards Dave towed Bill in SS to the half-way point between Byron and Tracy.

I drove to Tracy and met Bill and Larry.  Soon Marianne and Ramy showed up and we helped them rig their gliders.  (Ramy, though, had his glider rigged all by himself before we had time to look around.)

Larry towed Ramy first; I was scheduled on the next tow, to be followed by Marianne.  It was a long tow at 70 knots over three ridges to 6,000’ MSL and about 11 miles south of the airport to where the cloud streets began.  While on tow we passed through several thermals giving me some encouragement.  However, we also went through a couple of patches of sink where the vario showed 3 knots DOWN while on tow at full power.  This gave me pause, considering that I needed to keep Tracy within safe glide and so should not deviate from my personal and NCSA margin of 18:1 (5,000’ at Rel 1).

We arrived at the clouds at 6,000’ MSL and I released under a big fat one.  In these hills and ridges there were clouds and birds and invisible bumps marking the lift.  The problem was that my personal limit for the flight was a safe glide of 18:1 and the cloud bases were stuck around 6,500’ giving me only about 1,000’ to play with and explore the convergence line before hitting my personal minimum and announcing, “Ladies and Gentlemen, may I have your attention please, due to circumstances out of our control this flight has come to an end”.

The scenery was spectacular and I was able to soar with a pair of hawks not even 30 feet ahead of me for a few turns as we carved out circles in the sky.  At 6,500’MSL I was happy and confident, but at 5,500’MSL the music in the background clearly changed in tone.  Moreover, because of the multiple ridges to be crossed, the airport just blended into the background and appeared to be nowhere in sight even though I had it clearly marked in both of my GPS units (SS’s Cambridge and XCSoar on my PDA).

The Tiger Country flying experience for me was sprinkled with equal shares of elation and intimidation.  Soaring and exploration for me is a true joy.  At 6,000’ MSL I had exquisite views of the San Antonio Valley ahead, the southern San Francisco Bay waters to my right, and the Central Valley to my left.  Ramy called me, while I was trying to figure out the convergence line, saying that “the cloud bases in the San Antonio Valley were at 6-7,000’ and we just needed to fly the highway in the sky”.  The sky was blue and a smattering of cumulus was teasing me to wander further South into the convergence, and like Ulysses sailing past the sirens I was tempted to put one toe into the water and follow Ramy and Marianne into the fray.

I could see the San Antonio Valley (SAV) just 5 miles ahead, and 5 miles farther South.  It was beautiful.  So lush and green and all lit up with yellow sunlight on the ground and puffy white cumulus clouds overhead and in long streets.  Oh this was soooo tempting.  But I was gliding at 15:1 back to KTCY and the SAV was further away from the airport, I had to be home for dinner, and I did not want to buy this glider today.

This particular mountain flying South of KTCY was unlike any I had previously experienced in a glider.  I have flown solo at 6 different gliderports in my flying career.  I was used to always having an easily visible out, should things start to fall apart with the lift, which would put me over flat ground in relatively short order.  Here in Tiger Country there are hills, multiple ridges and narrow valleys in every direction and my Cambridge GPS and Del Streak running XCSoar were my security blanket to help ensure I adhered to my safety minimum.

After about a half hour of playing around over the hills and ridges Ramy came by to see if he could help me explore a bit further.  It was quite the experience to actually be gliding in “his” back yard and see him up close in the air.

He tried to find us some lift but after a bit of follow the leader I found myself at my personal minimum for return to the airport.  I called out to Ramy and Marianne with the bad news and wished them well as I departed to the North.

There were three distinct ridges ahead of me that I would need to cross to get the Central Valley and safety of the airport.  I also knew that I would be flying through patches of monster sink along the way back to KTCY so I went through my checklist to see who was flying the glider (frustrated me or confident me).  Once we sorted that all out I lined up the nose of the glider with the heading prescribed by my primary and backup GPS/Nav systems and off I went.

The first ridge was easy and I only lost about 500’.  The second ridge was much more challenging as I saw the grass in the hilltops accelerating toward me as I passed through 10 knots sink.  I was again back down to 18:1 glide to KTCY and as I pushed through the sink I hit a 6 knot thermal over a dark dirt clearing surrounding about a half-dozen cattle around a watering trough.  Something was rising pretty well from the party at the watering hole and it boosted me to over 3,000’ and comfortably over the last low ridge.

The pattern was pretty empty all day with just 76W towing, gliders landing, and the occasional aerobatic plane taking off/landing.  This picture is my first landing at KTCY, and Bill was "Johnny-on-the-spot" greeting me as I rolled to a stop just spitting distance from where I had hooked up to 76W at the start of my adventure.  This was a really great day!!! 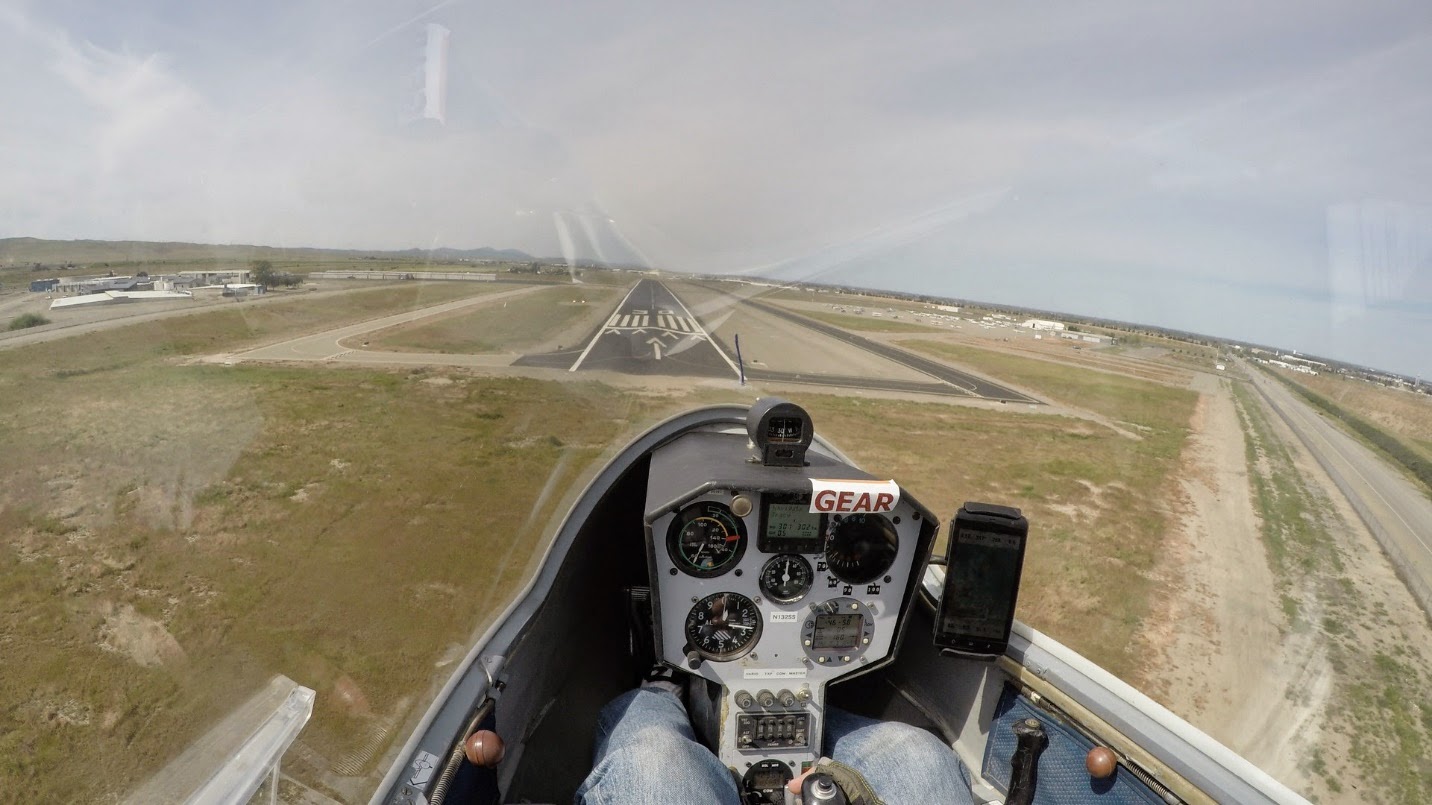 Finally, here are a couple views of the trace of my flight, using both the standard view, which includes some statistical information, and the Google Maps view with the terrain of Tiger Country clearly on display. 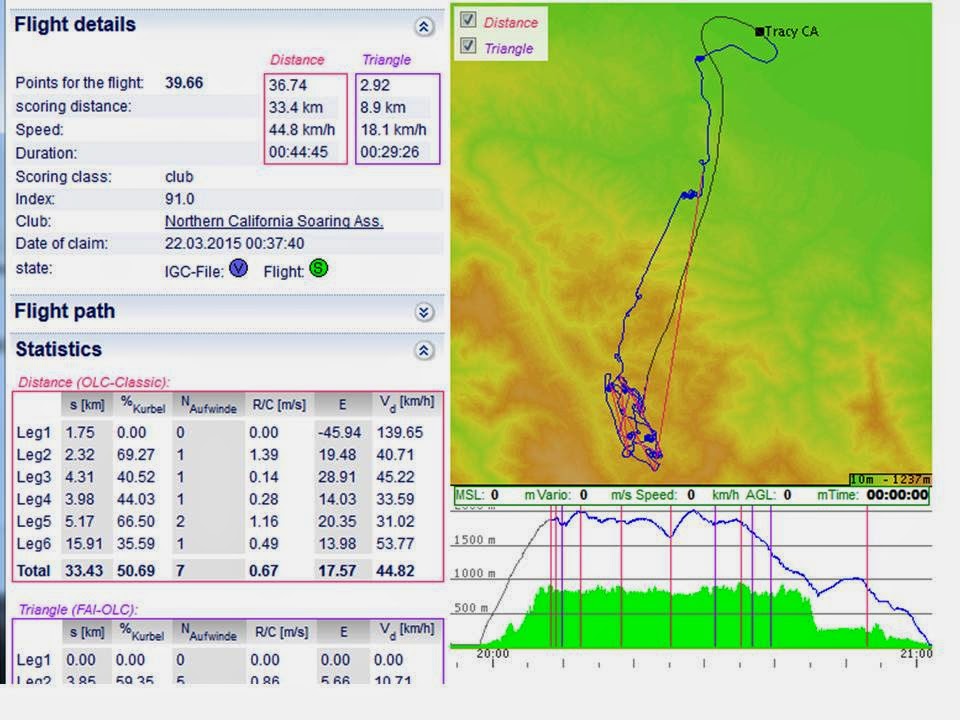 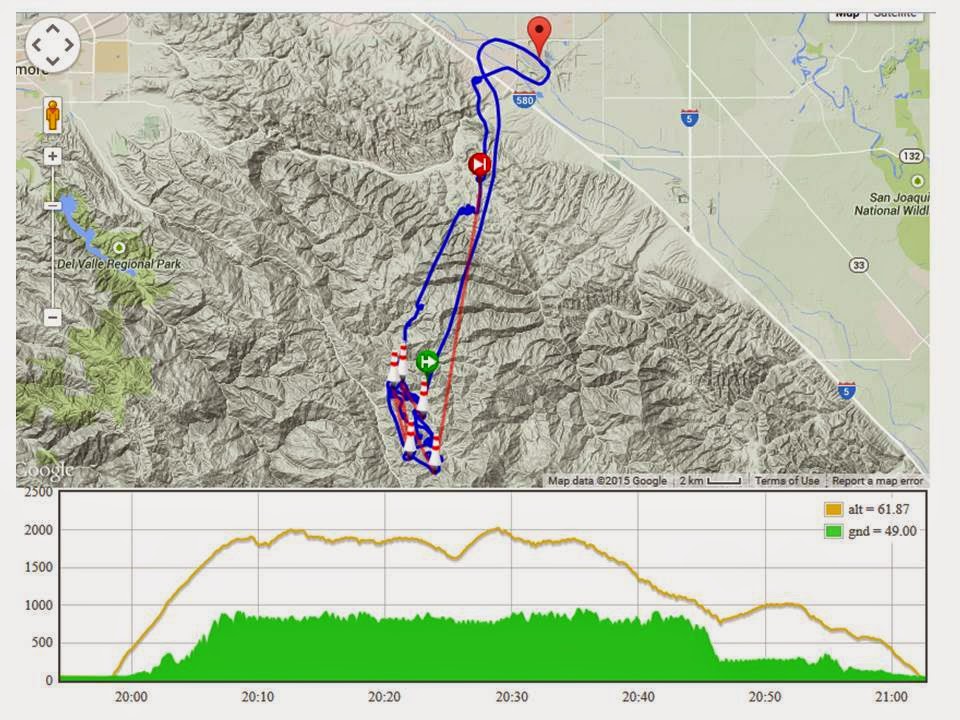