-My first Wave experience-
"Mike Voie described our flight last Sunday to the southwest side of Mt
Diablo to find and ride a Wave up to 15,800'. This was my first
experience with Wave Soaring and I really enjoyed it. We did a series
of figure eight turns west of Mt Diablo to stay in the wave and make the
most of it. We contacted NORCAL Control to advise them of our position
just outside the Class B airspace. The ride to Stockton and back to
Byron was also great with visibility CAVU the whole trip. Thanks to
Mike for the Wave instruction and Rick Robbins for the tow to the Wave.

Congratulations to Buzz for winning the 2010 PASCO Sawyer Award 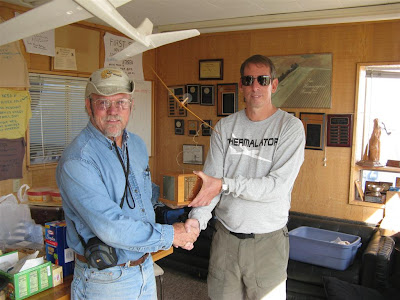 Congratulation to Buzz Graves for winning the 2010 PASCO Sawyer award. Buzz flew this year to the true spirit of this award, milking out the soaring conditions to the max, whenever and wherever he could. He is usually the first to launch and the last to land, accumulating miles and hours. According to OLC, Buzz flew a total of 22,242 km in 2010, accumulating 15232 pts in Region 11.
All it takes to win this award is to fly far and often. As one of the Sawyer recipients said, the award should come with a discount coupon for marriage counseling ;-)
For more information about the Sawyer Award, see http://www.pacificsoaring.org/awards/sawyer.html
Ramy Yanetz
PASCO Awards Chairperson
No comments: