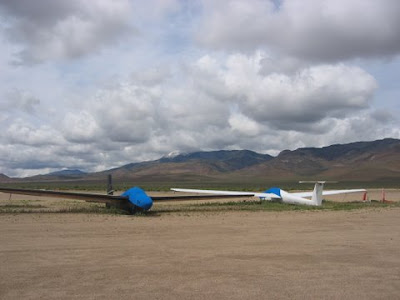 Had another great time at Thermal Camp at Air Sailing, NV last week. The weather didn’t cooperate the first 3 days: cold and wet. First time in many years (1930’s ?) that Reno received eight days of consecutive rainfall at the end of May. By Wed, weather was good, Thurs better, and Friday still good. My previous longest flight time solo was 55 minutes at Byron, which is not too bad for a rookie. On Wed at AS, I had two flights of over an hour in length; first up to 8800’, then 9300’ on second. Great fun. Thurs was better with a flight over 3.5 hrs and up to 11,900’ near Tule Peak. Lift everywhere… After almost 3 hours, I was getting tired and was down to about 7000’ and thinking of landing. Flying near the airport I flew into a 4 knot thermal and couldn’t just ignore it, that would be wasteful! So I circled and climbed back up to 11000’ again. Lift was stronger as I approached cloud base (maintain 1000’ clearance) and a few times the variometer was pegged and bouncing against 1000’ per min vertical climb rate. Whoopee…. Finally decided to pull spoilers around 9000’ and spiraled back down to airport…. 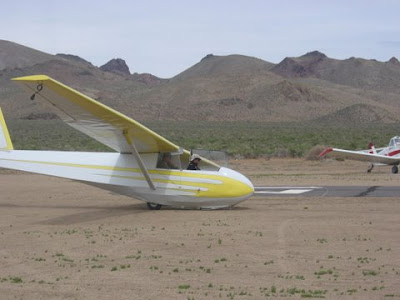 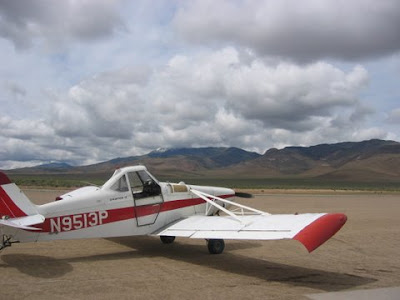 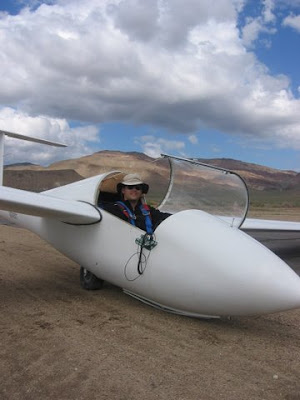 I showed up in Tahoe City on Friday night with a nice cold welcome and some good solid rain to help make me feel cozy. With rain in the forecast through most of the week, I was beginning to feel rather un-optimistic about thermal camp.

We all showed up at various times throughout the weekend. Mostly on Sunday. It stopped raining long enough to get some of us area checkouts. Monday and Tuesday were mostly spent watching everyone using their laptops to check the weather. Some very short flights were made.

Wednesday made up for it though. Rolf let us out early from morning class and we all made some pretty spectacular flights. I managed to eke out a 6 hour flight in SS. I could have stayed up another hour or so, but I knew Mark and Taylor were waiting patiently for me on the ground to head out to town for pizza. So, along with a 5k foot gain in altitude, I came down and was assured a portion of my Silver Badge. Ah, but Rolf said I needed a data logger, so I would have to do it again. So, I took advantage of another wonderful soaring day on Thursday to pull off a 5.8 hour flight or so with at least a 6k foot gain. This time with the data logger.

Rolf took me off the leash on Friday (our toughest thermal day) and let me plan a 35 mile flight to Silver Springs. After a VERY short first flight (roughly 5 minutes from release to landing), and a most embarrassing wait behind 4 other gliders I managed to get back up and stay up. Although, I was almost back in the pattern on that tow as well. Finally, I caught a break and rode a decent thermal to 10k. From there, it was perhaps one of the slowest average speeds on record, but a completed cross country nonetheless.

It was the first time I have been out of gliding range of my homefield and the initial commit was, to say the least, quite exhilarating. The final 10 miles or so to Silver Springs was completely devoid of lift and I wondered what I was going to do to get back without an aero tow. I saw some cu's forming another 10 miles further away and thought, if I'm going to land out at Silver Springs anyways, I might as well go big. Luckily, they paid off big time and allowed me to work my way back up to I-80 and over into Palamino valley. I'm gonna be honest with ya, even at a conservative 4 miles per thousand feet, my final glide looked quite impossible. Especially with some areas of sink.

So many emotions on a cross country flight. Exhilaration, frustration, relief, disbelief, complete elation. I can't wait to do it again.

With the Silver Badge out of the way, it's time to look forward to finishing off my Bronze Badge. Haha, you've got to love soaring up there.