Congratulations to Mike Shapira, who had his first flight in the 1-26, just after achieving his SSA "A" Badge! 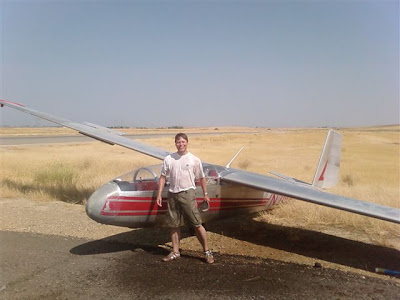 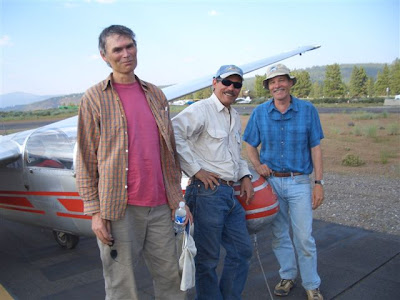 We were 9, Sal, Mark and I from NCSA, and Eric, Cheese, and Bill from USAF, Monique, Richard, and Rolf. I was at first impressed and daunted by resumes including F-15, commercial airline, and air force glider instructor rating. I held the role of least experienced.

The 3 from USAF were bent on attaining silver ratings. We had 2 gliders, our own Blanik AS, and Duo Discus DDX rented by the USAF contingent. Mornings were dedicated to ground school, briefings,and classroom learning. I remember especially much excellent material on flight physiology.

The rest of day was dedicated to flying. It was my first time flying out of anywhere but home Byron. I thought the Truckee operations were efficiently run, with off-runway staging areas, and towing gliders into place with golf cart. The deep pit below the glide path of runway 19 was scary to me, especially at first. I was perennially far too high in the pattern. It was also my first time using oxygen, and I was having a little trouble layering on yet another piece of essential equipment. This became a little more natural and comfortable by the end of the week.

We were hindered most of the week by smoke. On one flight, I saw the deep brown smoke literally pouring into the valley through clefts in the mountains and through Donner pass. I flew three soaring flights, one each with Richard, Rolf, and Monique,reaching altitudes of 13, 12, and 15 K feet. Fittingly, my last flight of the last day was my best. With the smoke significantly cleared for the first time that week, Monique and I soared to 15,000 feet, a new personal record. I thought I flew the best when I had lots of altitude and time to get used to it. At high altitude, Monique suggested, "OK,let's go someplace." So we toured Mt. Verdi, Mt. Rose and NorthStar /Mt. Pluto. I learned the "photo op" turn. Steep right turn ... OK, got it, roll out. We had Reno Intl. in sight.

Also on Friday, Cheese happily achieved his 5 hour flight.Monique told me during the week, "This is a manic depressive sport." I could certainly relate to that. I had flights I loved and where I couldn't seem to do anything right.Richard's BBQ Friday night was well and cooperatively done. Very hospitable. I consulted on menu planning. While at the BBQ, I observed a hawk carrying its fish dinner home from Martis Lake by air. The sun appeared as a large distant luminous red balloon at sunset. I was recognized as the most improved pilot at the awards ceremony.

I helped put out a small brush fire on next Saturday morning with the garden hose used to run the lawn sprinkler. 100% containment. No structures threatened. Turns out that the hot coals from the night before were dumped in the sage brush and smoldered for a couple of hours before coming to life in flame.

Thank you to our instructors for organizing, making it all happen and being there for us.. Yes, I'd do it again next year, but hopefully without the smoke. 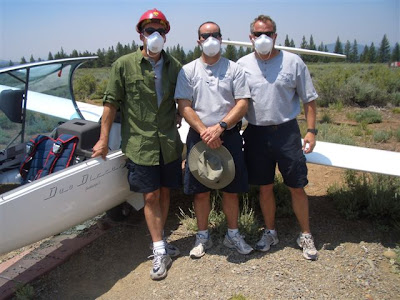 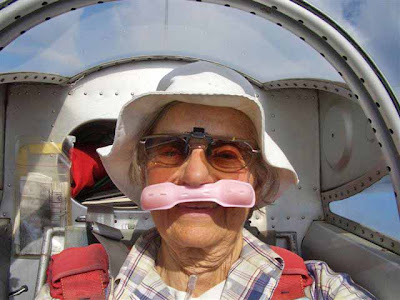 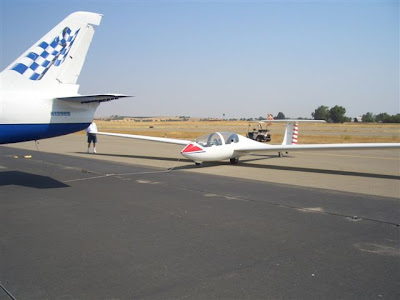 Congratulations to Larry Suter for receiving a Certificate for completing a phase of the new FAA WINGS!