A few weeks ago I reported on having contacted the wave for the first time, although I managed to stay in it only about ten to fifteen minutes and only gained about three hundred feet. But I got a taste.

Today  (February 15, 2014) I had my first serious encounter with the wave, and it went something like this:

It all got started a couple nights ago when Dan Colton pointed out that the RASP was showing what looked like a good wave day coming, with a southwest wind.

This generated a good deal of excitement on the email list, with Buzz and Ramy declaring that they would fly, and fly early, and others jockeying for position to reserve the club aircraft.

I had planned to fly SS, and since Dan already had it reserved until 1:30, I put in a reservation for 2:00 pm. I was also hopeful of getting a flight in 81C, at least a pattern, to get some practice flying from the back seat. I didn't reserve it, since having two planes reserved on the same day seemed, well, gluttonous. But  81C had come back from the repair shop, and hadn't been reassembled, so I volunteered to make the "first flight" of 81C after we reassembled her.

The schedule got some oddities thrown in, partly because of the fact that there was no fuel in Byron. Terence and Matthew had launched and had flight in which they reported scattered bits of ragged lift, but nothing like the wave that was predicted. Dan had a similar flight in SS, and returned before I could get my reassembly-check ride in 81C. Since the day was wearing on, and the Big Wave appeared to be a no-show, I decided to abandon my SS flight and content myself with a dual flight in 81C, with me in the back seat.  So I gave up my spot in SS to Peter, and asked Dan Colton if he would ride in the front seat while I flew from the back. Dan seemed willing to risk his life with me at the controls.

Buzz and Ramy had launched early, and their radio  reports were indicating pretty anemic conditions, especially compared to all the hoopla over the RASP the previous night. But they were still up, and had evidently made the crossing of the delta and disappeared to the north.  This was consistent with the report from Matthew and Terence indicating disorganized lift here and there, but no organized wave.

We were ready to go, but had to wait over an hour for the tow, because 76W had to go to Rio Vista for fuel. Fortunately, while we were waiting the wave got a bit more organized. We released over the reservoir at 4200 feet, and found lift varying between +2 and +3. We started poking upwind, trying to stay in the lift and minimize our ground speed to stay in it longer. After a while we turned northwest along the ridge, perpendicular to the wind, and found and stayed in a stronger lift of +4. We managed to climb to 7000 feet, and then turned to go upwind to Mt. Diablo. We got to 8000 ft, and thought we might have a good run to the north, but then hit turbulent sink and fell off the north end of the wave (at least the part we were on).  So we turned around and headed a back to the reservoir. We lost a bunch of altitude, arriving back at the north shore down around 6500 feet. When we got there we found and kept working a wave, mostly +2 to +3 knots, but with occasional spurts up to +4 or even +6 knots. It was not broad in areal extent, so we were flying large ovals or figure eights to try and maximize our time in lift.

We were joined in this stretch by Terence and Andrew in KP, and began a lengthy dance in which we were constantly checking with them to find out where they were and what sort of lift or sink they were in.We worked hard to keep a visual watch on where they were (and they were trying to keep track of us). This was tricky, because while we were sharing the wave, it was not organized like circling together in a thermal.   Hmmm, maybe there is something to this FLARM stuff after all...  And we got close enough to snap a few pictures, although using a camera phone limited the quality of the photography somewhat.

But it was pretty cool, working together to find good lift. Throughout this time we were averaging a fairly steady climb, up through 8000, then 9000, and eventually topping out around 10,600 feet. Actually, we didn't top out, as there was still plenty of lift, but we were in mist and some rain and near cloud base, and decided we were also getting cold and already had plenty of altitude. And, candidly, since earlier reports were of nothing really workable, we weren't expecting a flight of any length, and neither of us had made provision for pilot relief  (I wonder how many times I'm going to have to learn that lesson before I act like a Boy Scout and Be Prepared ?). So we took a long leisurely glide up toward Antioch, and eventually over to Disco Bay and finally back to C83. Over north of Disco we had some fun, flying both upwind and downwind. Going upwind at an IAS of 65 knots we were making about 32 knots over the ground, while going downwind we were making 108 knots over the ground. As we moved down to the east side of the fore bay I felt like I had drifted too far downwind, and cranked it up to just below 90 knots IAS to penetrate the wind.


Byron was covered in lift when we finally got back there. I had to pull the spoiler at around 4300 feet to get down.  We were up two and a quarter hours. It was easily the best flight I've had in Byron.

After getting back, I found that Terence had snapped a photo of us, too:
Most of the wave was concentrated over the valley in which Los Vaqueros Reservoir sits, and just at the north end of the lake. Here is a view of the track and profile from OLC.  For a better look, the link is: 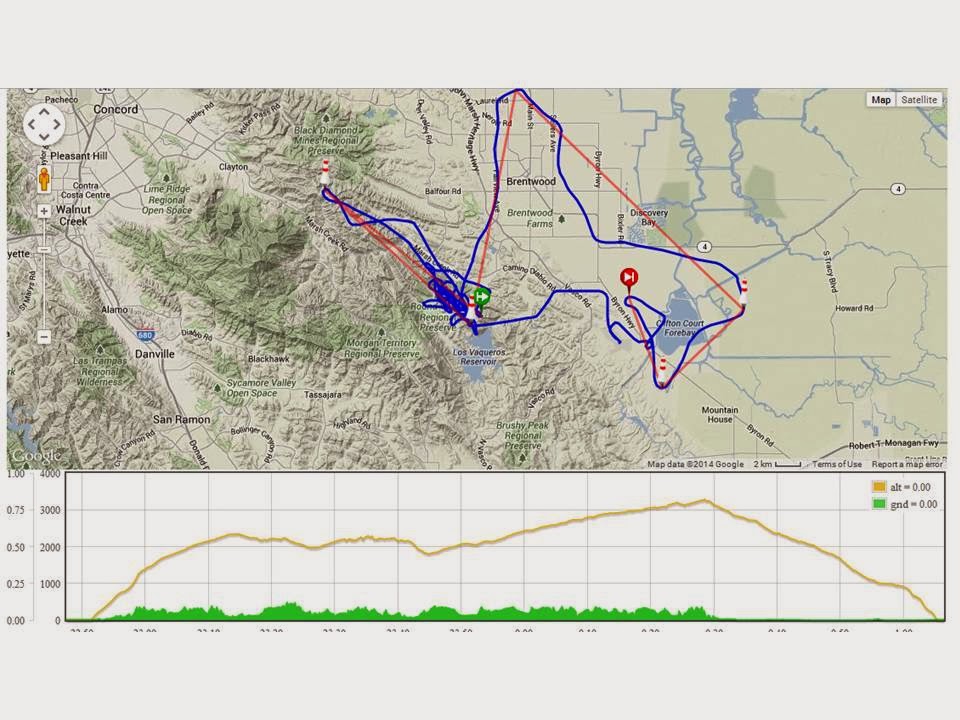 I also posted the flight to Doarama, at  http://www.doarama.com/view/3702  (I suggest using 8x or 16x speed, and a decent graphics processor- it looks great on my desktop, but is pretty jerky on my little laptop, and cannot keep up loading the Bing imagery.  And I believe it is unplayable on an Apple product.)

By the way, Ramy and Buzz made quite a day of it.  After struggling to get going, they captured the wave, crossed the Delta, and flew up to Williams and back.  I thought I heard them chattering about reaching 16,000 feet or so.  Ramy took this awesome selfie during the flight: 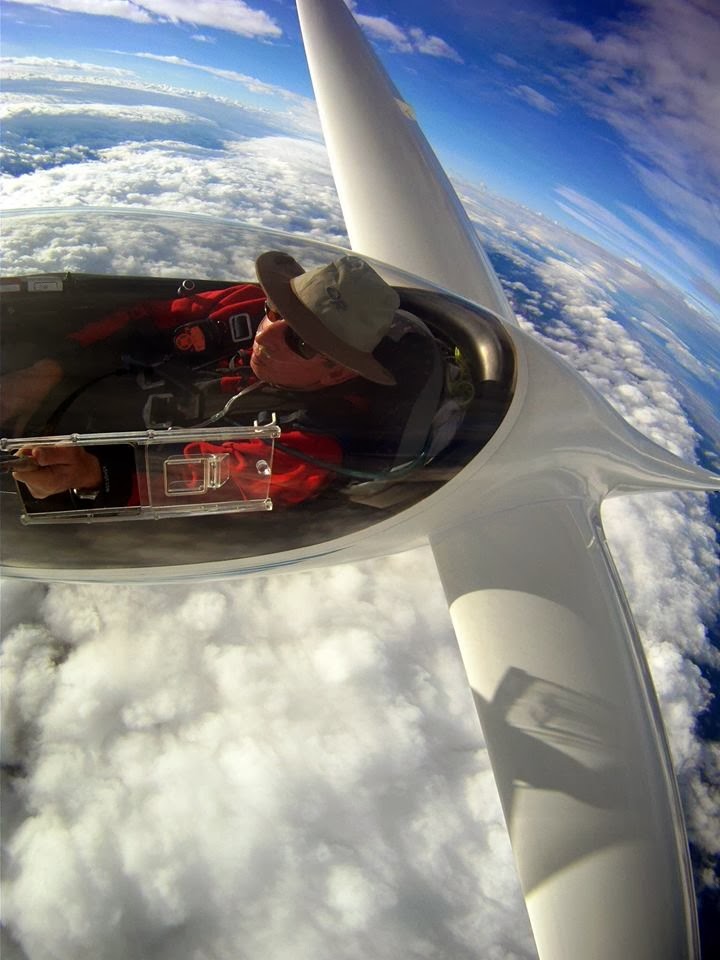 And below is his track and profile. For more detail:
http://www.onlinecontest.org/olc-2.0/gliding/flightinfo.html?dsId=3474099: