Sunday at Byron was an unusual day for winds. We started off with very light winds favoring runway 12. Later the winds shifted, became stronger nearly straight down 23. I found our tow pilot Steve Yoder to be very accommodating and personable, taking us just where we wanted to go.

In the morning, I was discouraged by the local weather here in Albany, and called Mike Schneider to set up some ground school time during what I imagined would be a long, marginally flyable day. He immediately encouraged me, saying, "I intend to fly." On 580 east, I could see the promising blue patch of sky in front of me. It drizzled slightly as we towed FB and EV out to the line, and the rain more or less left us alone for the rest of the day.

Larry brought out his yellow Nevada desert special glider and had a go at it, but tied down after one flight. I flew solo twice in EV, one high and one pattern. I was able to sustain altitude just under a cloud base of about 2800, but was able to work no more lift down about 1500 ft. It was good practice for me to land on an unfamiliar left pattern on 12. John, our youth scholarship student was out, and flew with Mike. They reported weak lift. I had the opportunity to observe his and others' slips on final 23 from nearly directly below with strong head wind. Looked like anti gravity. Vertical landing.

Eric Yeargan flew with Mike. I had some good talks
with him. He said how using the radio overloads him on landing. "It's enough to concentrate on approach angle and airspeed." I've been there. I guessed that he's going to solo with fewer flights than I. Eugene was out and flew once as Mike's last student of the day. Mike S. bridged the language gap with flying gestures. I heard Eugene talk on the radio for the first time.

Dmitry Chichkov made an appearance on his cool radio-controlled electric powered skateboard, saying he needed to take some photos of the main gear on his Rossia glider. (When I saw the board alone I thought Buzz was paying us a visit) It had been a long time since I'd seen Dmitry out. I asked him briefly about the RASP, and learned he's still working at the same place. It was a do-it-yourself day, as the scheduled FM did not appear, so duties were split informally between Eric, Fritz, and myself.

The jumpers were using elevator 1 most of the day, a much smaller craft than elevator 2. As they IFR jumped, through the clouds, Steve and I wondered if it was legal. Steve made his first tow off 23, first asking me for advice. I suggested he talk to Mike. "Make a left turn at about 100 ft to avoid windmills and rising terrain." At the end of the day Mike gave an hour of much appreciated ground schooling. Having recently soloed, it's all new territory, and resetting of goals and priorities.

I changed the battery connector on EV to the Anderson power pole, and so this is the first day that we flew with both the new Sonnenshein batteries, numbers 8 and 9. The radios were strong all day, and Mike surmised that one of the batteries had fully recharged in an hour's time. On the negative side, the new connectors do not provide a firm connection. And EV's battery came disconnected when I fished out a parachute cover from behind the seat. Apologies for what I've forgotten or left out. Even though I came prepared for the work with all manner of rain and cold
weather gear, it turned out to be quite pleasant, listening to the red-wing blackbirds calling from their hiding places in the tall green spring grass.

A Diamond in Minden! 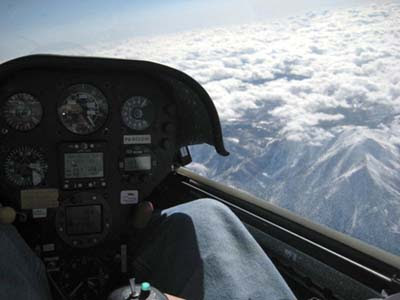 "I have been after this last diamond since 2005 and Last time I missed it by 300'. I was not going to make the same mistake today!

Lets hope the badgelady does not find any technical problems with the trace or application." 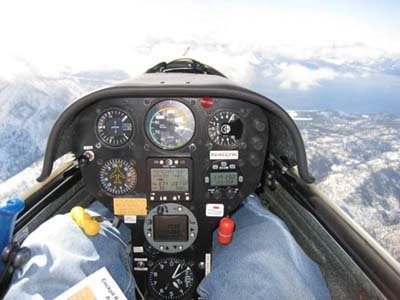 "Wave kicked up again this afternoon in Minden, and Morteza Ansari, who has been chewing his fingernails all January and February waiting for his chance, got up here from the Bay Area in response to our wave alert to give it a try. He launched in SoaringNV's LS-4 just after lunch, got off tow at 7,600' MSL (2,900' AGL) and poked around looking for some strong, smooth lift. The Minden West window as already open for another SoaringNV glider, so there was no delay as Morteza worked up to 18,000 and beyond. We had excellent visibility again, with clouds only up to around 12,000', so remaining clear of clouds was not a problem. About an hour after launch Morteza decided he had enough altitude for the diamond and the Lennie pin, so he headed home.

Analyzing the trace after his flight it appears he turned around at around 26,500', for a total gain of approximately 18,000'." 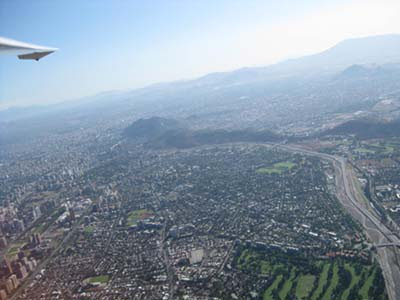 Great flight in Santiago over the Andes foothills in a Super Blanik L-23. Also see OLC file under Chlile 03/08. Saw a condor in flight. The mountains are big and steep, the thermals are narrow and choppy and you fly really close to the rocks to get good ridgelift. Also, it is different to fly over parts of a city of 5 million people, as you can see in the attached photo.

See you in April! 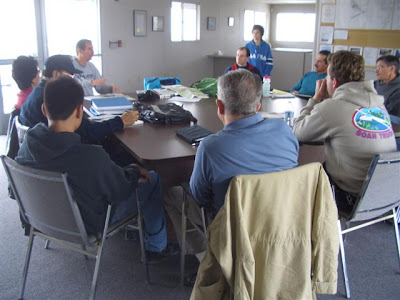 -Well done guys! Now to finish up the flying tasks of that badge....,

Thanks to Ramy Yanetz for sharing his experiences on cross-country soaring from Byron - in particular on the decision making process which led to his recent field landing. 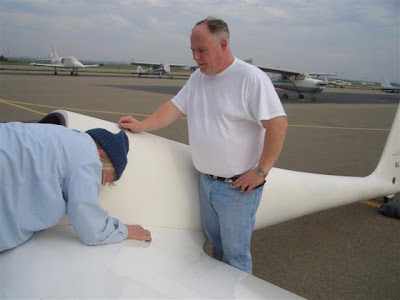 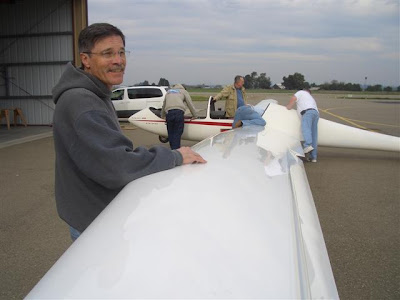 Thanks to Larry (buried in Grob KP in these photos) and his assistants, who worked hard on removing and re-installing 2 sets of wings for Grob Annuals.