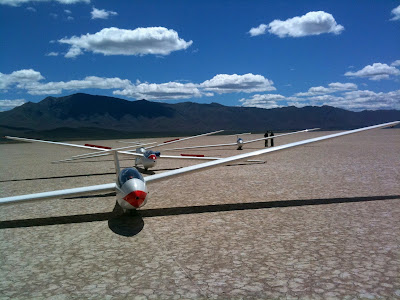 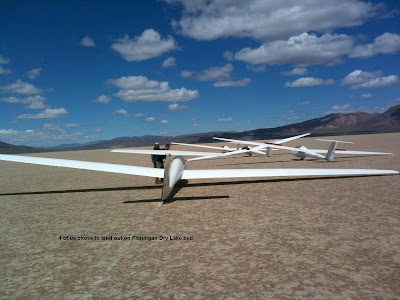 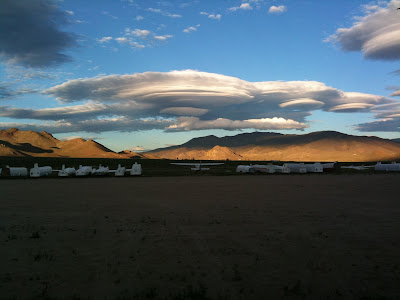 My thermal camp flights worth sharing would be: my first contact with
ATC, my first land out on a dry lake, and my near miss with another
glider.


The land out on Flanigan Dry Lake was a blast. I was a little
intimidated by the thought of leaving ASI and fighting a 10 to15 knot
headwind, and possible sink to the lake bed, but my eyes, sectional,
and gps all said I could make it. I left the Dog skins at 10,600' and
arrived over Flanigan at 8,000' (4,000' to spare). That feeling of
actually going somewhere in a glider is a real rush if your used to
just floating around over the airport (even if it was just a short 20
mile hop from ASI) I have photos on Face Book if anyone wants to
see.

I have been trying to think of the best way to describe what almost
happened to another glider pilot and my self. We came about 50 feet
from a head on collision over Tule ridge. I was thermaling over Tule,
then headed north on the ridge (about 10,500 60 knots). As I scanned
for traffic on the ridge there was suddenly another glider blocking
my view, he was rapidly expanding in my field of view. The next thing
I knew I was doing about 100 knots with the stick full forward.
Everything that had been stowed in the side pockets was in my lap.
Later the other pilot told me he saw me push the stick forward.

We talked after landing. Both of us were looking out. We almost
didn't see each other in time. It happend so fast there was not even
time for adrenaline to be released.

I've been gliding 3 years and have had as many "to close for comfort"
calls with other aircraft. Each time it's been closer then the last.
The sky is not so big.

Keep the canopy clean. Talk on the radio (IF SOME PEOPLE DONT LIKE
ALOT OF CHATTER "TOUGH SHIT")

©2010 Google  Terms - Download Picasa - Launch Picasa - Privacy Policy - Developer - Blog - Google Home
I arrived at Air Sailing, about 30 miles north of Reno, on Sunday evening to be greeted with a sky was full of lenticulars (I thought I thoght I was supposed to be at a thermal camp, not a wave camp!). However on Monday, after the morning lecture session, Tristan and I took the second tow of the day in the Grob 103 Acro and found plenty of thermals. I suppose it must have been a good day - we were in the air for 5.5 hours (I wish I had some foam for under my rear end!).

Tuesday didn't look too promising at first. The sky had a lot of high cirrus and no obvious thermal activity, but we took a tow and the tow pilot headed for an area where he thought lift would be (you can't beat local knowledge). We scratched around for a while, eventually found a thermal and headed up. We maintained a good altitude of about 8-9,000 MSL for a couple of hours, exploring the area, and eventually ended up soaring along a ridge at 9-10,000' MSL. We did this for about an hour, as there was a report of wave in the area and we could see the lennies forming in front and behind us.

This really paid off for us. All the other gliders had returned to the field and we set off upwind. We contacted the smooth wave lift and almost before we knew it we were contacting Reno Approach, since we were now approaching 18,000' MSL. We came down with full spoilers at 80kts to around 9,000' and said "what the heck, let's do it again". So up we went in 10kts+ to 18,000' again. This time we flew downwind (through the sink) until we contacted the next wave, which we worked for a while. We didn't get quite so high in this wave since we were getting pretty close to cloudbase.

Since we now had plenty of altitude and knew where the lift was, we did more exploring, burning off altitude for distance, Tristan taking some sightseeing photos on the way. Since we had only been in the air five hours, Tristan made the decision to go into the wave again. So, off we went rocketing up to 18,000'. This time we came down with full spoiler at 80kts again, and landed back at AIR sailing after a total of six hours in the air. Did I say I needed a foam cushion?

Thermals, ridge lift and wave, all in one six-hour flight. Magic! I suppose Tuesday wasn't a bad day, after all.