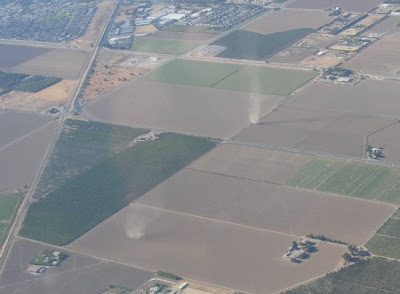 Just received these photos from Roger, who celebrated his birthday in the air last Sunday. We chased dust devils and climbed in the local area to 4,900' for a pleasant early fall soaring day. 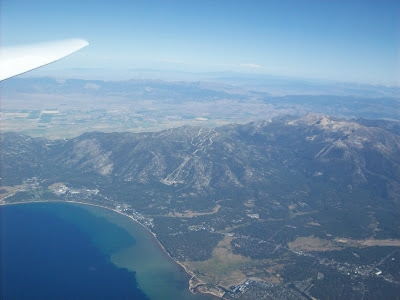 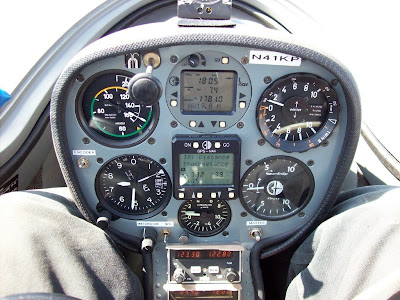 Only 2 gliders flew at Truckee that day (KP and JH). Winds on the ground were intimidating. A gust almost knocked me off my feet while waiting for ground crew. I would not have flown without an instructor and an experienced tow pilot (Thanks to Don for the tow).

I cant fly this weekend because of work.
If you fly Truckee watch out for those Reno air racers.

It was one of the windiest nights I have ever spent in Truckee and one of the coldest for this time of year with temps in the low 20's. The first cold front from the Pacific northwest passed through and changed the normal summer weather patterns from unstable air with thermals to stable air with increasing winds aloft, all the right ingredients for good wave. Main problem was the rotor was reaching the ground and had operations shut down during the first part of the day. It was till around noon did the wind start to back off and come more down the runway on 19. Seth and I had just finished making a battery adaptor cable for KP and were checking it out in the plane when Don came by and said he thought it was OK to tow if we wanted to go. The forecast was near perfect for wave, there were no cloud marker to tell us where it might be found. A quick discussion with local experts gave us some idea where it might be and they were pretty much right. Tow was bumpy and Seth did a good job of staying in the correct tow position to minimize slack rope, low and to the inside of the turns. At around 7k Don found the upside of the rotor an indicated 17 knots up, in less than 2 turns in this area we gained 2k and released around 9k. Continued to climb to around 11.5k when we started our up wind search for the wave, we bumped along turning when we thought we could until around North Star we felt that smooth air, going up at 1-2 knots at first. This is the classic way to get your self into the wave, work the rotor until you can't climb any more and then push out up wind. A mistake many make is to try and circle, the lift is fixed to the ground and it is easy to get blown down wind. Better to correct a mistake of being too far up wind than to get blown down wind and have to fight your way up wind.

Well this was going to be Seth's first wave flight and x-c if things worked out which they did. And yes the winds early on were really nasty, you know when the rotor is reaching the ground when you experience very gusty winds with a large variability in wind direction. A situation that has been the root cause of many accidents to both gliders and tow planes a like. The irony of it all is after you get through all the turbulence, on top it is perfectly smooth air that is heavenly. I sort of relate it to surfing in big waves, you need to paddle out through the white water before you can get to the outside to enjoy the fast clean rides.

This day had all the elements including a first comfortable place to be flying wave in high winds, i. e. flying a wave band up wind of the airport. As nice as it is flying in the lift, the bands of sink between the wave bars can dump you in a hurry, especially if you need to penetrate into the wind, The day before I and others needed to use wave lift to get back to Truckee, for me it was all the way from Mono Lake , in doing so I need to jump several wave bands up wind, each time losing tremendous altitude with each jump. My trace on OLC tells the story pretty well. Talk about a roller coaster ride on the grandest scale.

Sharing a flight like we had together is one of those experiences that has kept me in the role of instructor for over 20 years. These are conditions that require skill, knowledge and experience to fly safely and can teach you a tough lesson if you find yourself in the impact zone, a phrase we use in surfing when you get caught on the inside where the waves are breaking on your head. Coming up this winter we can have similar conditions at Byron with great wave flying off Mt. Diablo. There is great x-c potential when this happens and we are still learning what might be possible in terms of distances. Wave can be found as far south as Avenal and north well beyond Williams. So who is going to claim the first 1000km flight out of Byron!!!! Maybe a prize could awarded like some free tows or something like Soar Hollister gave Eric Rupp for his flight to Calexico this last season.

It was a great flight and fun to share the knowledge and experience and look forward to doing more of the same in the future,