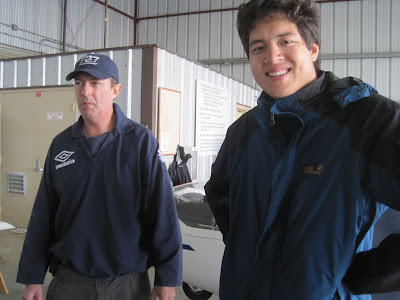 The day started out with a few practice flights, including a 250 feet
rope break which I found quite interesting, being rather close to the
ground while making a tear drop. I felt a mixed sense of calm and
excitement when the tow plane was in front of me, and for the first time
the back seat was empty. While I have flown solo in the Netherlands, I
had only done one dual aerotow before coming to the US, so it felt like
a first ever solo again.

The weather looked like the thermals would become stronger in the
beginning of the afternoon, so I was hoping for a prolonged flight. As
we took off I felt some thermals coming at 3000 ft when we were about
three-quarter way to Bushy Peak, but I wanted to stay on till about 4000
ft. to make sure it was not just a slight bump. Coming off the tow
plane, I flew towards a promising cloud and sure enough, the vario
pointed at a +2 taking me up to about 4200 ft. Not wanting to get too
close to the cloud, the clearance requirements from the pre-solo exam
still fresh in my memory, I got out from under the cloud and took the
opportunity to search for a stronger thermal.

Not finding a stronger thermal, I repeated the process and after
dropping to 3000 ft again, it looked like my cloud was dissolving
slowly. Searching around, I found not a thermal but a bird, perhaps an
eagle? The bird flew away and I followed him, rather surprised at his
speed. When he started circling, I took a position at his 12 o'clock,
and due to his much shorter turn radius it seemed almost like we were
thermalling together. Another bird joined us, and I had to make a sharp
turn in order to avoid hitting it with my wing, so I flew out of the
thermal and joined in under them. Yes, I was getting out thermalled by
birds, but hey they most likely have a lighter wing loading.

Halfway through this, the AWOS frequency suddenly started emitting only
a beep instead of the weather information, so it seemed like my radio
was non functional. With the thermals dissolving, not quite reaching the
strength we expected in the morning, I started towards downwind at 1800
ft. to make sure the runway was empty before I had to land. With a
power-plane just taking off as I was mid field on downwind, I had plenty
of altitude left, and landed approximately 1.2 hours after take-off.