This is as good of a reason as any to use transponders at altitude. I was sitting in front of a Boeing 777 Pratt Whitney PW4090 engine this afternoon and had a coworker snap this photo. That's a 90,000 lb. thrust engine and I'm about 6 feet tall. They say the outside cowling diameter is equal to the diameter of a 737 fuselage. 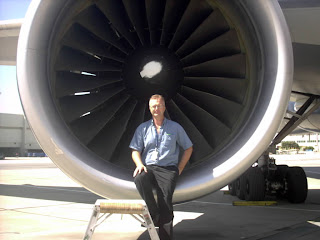 I think a single place ship could disappear in here without a hickup. It's a monster.

"Silent Wings" is a documentary about the American WWII glider program. It's new--released this month, in fact--and is available on DVD. In two hours, it covers everything from the beginnings of WWII glider efforts in Germany and the late American start, through the D-Day drops and a final effort across the Rhein in the war's last days. Other major operations are also touched on.

Overall, I am left with the impression that landing troops in gliders was fantastically dangerous. Thirty to forty percent casualties were routine. The gliders were vulnerable to flak, tended to crash on landing, and were easy to knock out with obstacles on the landing-fields. On balance, if I had to hit the dirt under fire, I'd take my chances under a parachute rather than landing in a glider.

So what's good about this DVD? Well, there's a lot of information about a good dozen operations. I had heard and read about some of them (Eben Emael, Crete, Normandy), but the rest were completely new to me (Sicily, southern France). The interviews with pilots on both sides who actually flew the ops are also interesting.

And the bad? There's a lot of reverent talk about the American GIs' heroism, and the vast and worthy task they were undertaking. The fact that this is mostly true does not keep the sentiments from tiring in the telling and retelling.

Here's a photo of the plane we had a near miss with.

Scenes from a Workday

By the power of Greyskull... 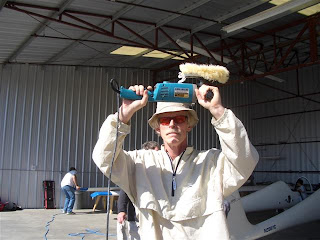 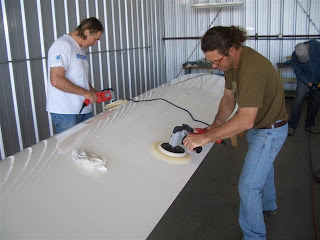 One person working. Four people watching. Welcome to the Teamsters... 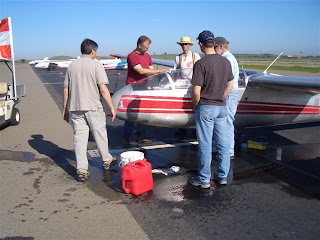 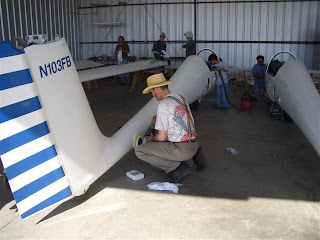 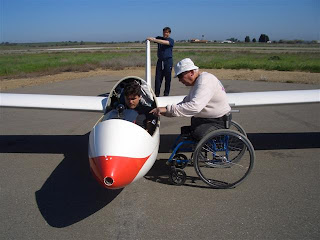 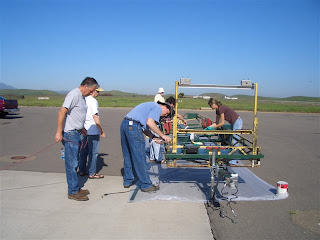 Aah, the glory job. But Mike's generous; see, he shares... 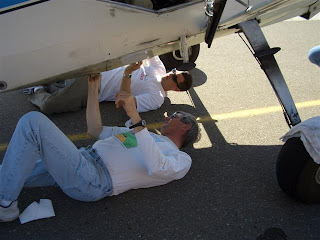 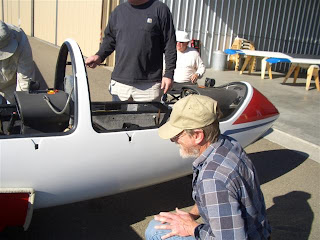 Bonk, bonk. Was I supposed to thaw these out? 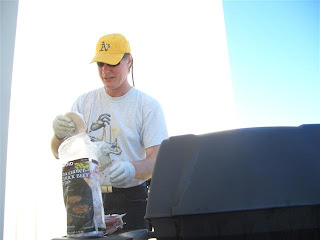 Pictures by Monique. Commentary by Johan.
No comments: 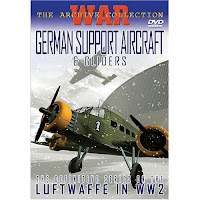 "German Support Aircraft & Gliders" is an hour-long program available on DVD.
The title is accurately descriptive, and the program consists of German wartime
footage (in black and white), with narration by an Englishman. Much of the
time is devoted to the German air transport service, and its use of the classic
tri-motor Junkers Ju-52 cargo aircraft.

The bits that deal with gliders describe the use of gliders in the assault on
the Belgian fortress Eben Emael, and also in the invasion of Crete. The workhorse
gliders of the Germans were the conventional DFS-230 and the twin-boom Gotha 242.
The program also dwells on the huge Me 321 Gigant glider, big enough to transport two light tanks. 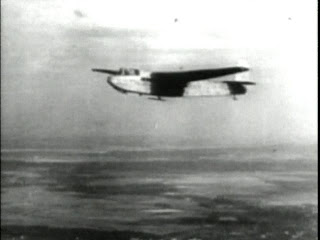 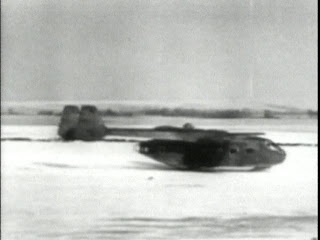 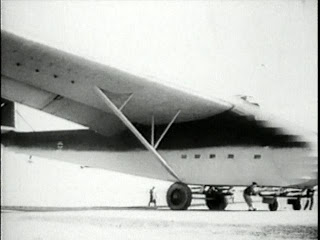 The DVD is available on Amazon,
and on Netflix. Worth a place in your queue for the coverage of the Me 321.

Your mission, should you accept it, is two-fold. First, identify the motion picture that is the source of the following frames. Second, identify the model of glider depicted in them.

You may post your answers in the Comments section, below. I'll reveal the correct answers in one week, if no one has succeeded by then.

Here is Paul's review of Russell Holtz's two new glider manuals, which the club is currently evaluating. For more information about the books, consult the
website. -- JL

I purchased the new Holtz textbooks and workbooks a month ago online.
From the perspective of a new trainee, I thought that I'd add my
endorsement of his product.

As primary study texts, I have also used the FAA "Glider Flying
Handbook" and Knauff's "Transition To Gliders". I would offer
that I found the FAA book to be very well done. Its full-color diagrams
and layout are superior to the rest. I studied the FAA text and Holtz's
books in parallel topic-for-topic. They were very similar and, in
fact, Holtz's presentation copied that of the FAA text verbatim in
many instances. I fear that he may have overused the FAA book as a
guide while developing his own, but his product is very well
presented nonetheless. Although the Knauff book was recommended by
several at NCSA, I found it shallow and brief overall. This is
perhaps owing to its admitted target readership of transitioning
power pilots, but I found a review of the basics offered by the
other two sources beneficial.

I would recommend the FAA book to new trainees, power background or
not. I would further recommend the Holtz texts, notwithstanding
their substantial price of admission. The concept of separating the
academic material and the flight operations material into two
different books is good, and Holtz's text and graphics are great
throughout. The Knauff book did have some good and unique
material, but I would recommend it as a supplement to the other two for
anyone new to soaring.

I am a new member of NCSA, having joined on February 10, 2007. I'll attach two images that may explain my interest in soaring. 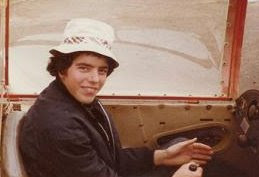 In the first, taken on February 23, 1980, a thrilled fourteen-year-old is at the controls of a Schweizer 2-33. I experienced my first and only glider lesson that day, in N2476W out of Sky Sailing in Fremont. 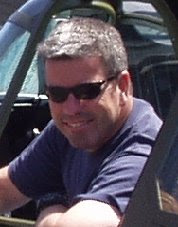 The second image shows me, older and grayer, more recently. I have been fortunate to fly a wide variety of aircraft in that twenty-seven year span, but never did fulfill the early dream of flying gliders. At the time, I could not understand why my father would not let me ride my Schwinn Stingray along the Nimitz Freeway from Alameda to Fremont. I would have done it!

I am excited to finally be able to pursue the training, and I look forward to learning as much as possible about soaring from the staff and membership of NCSA.

My non-aviation interests include guitar and SCUBA diving. I live in Pleasanton with my wife Charissa, and our two boys, Ryan (11) and Michael (8). They all enjoy the rural nature of C83, and I hope that they will accompany me out to the gliderport occasionally.

Congratulations to Johan Larson who has completed the requirements for his
WINGS Phase I.

Congratulations to Charlie Ferguson who has completed the requirements for
his WINGS Phase II.

Mike Oshell, Buzz Graves and I all attended the Air Sailing X-C camp this year. I highly recommend this camp to NCSA’ers. It is a lot of fun and really gives a boost to your soaring skills. It is held at Air Sailing, which is about 45 minutes north of Reno, NV, in a pretty isolated area called Palomino Valley, very near Pyramid Lake. The camp is 5-1/2 days in length. You arrive Sunday evening and leave Friday evening. The "tuition" was $300; lodging is $30-$60 depending on your choice of accommodation. Tows average $35 each.

The camp is organized similar to conferences I have attended. Each day, lectures start at 8:00am sharp and go through 11:30. Then there is a pilot’s meeting and weather briefing, following by gridding the gliders. All afternoon is spent flying with a “lead pilot” (more on this later). You return for dinner, then there are usually evening sessions from about 7:30pm to 9:30pm. So for 5 days, it is flat out soaring and sleeping, with a little food thrown in. After 5 days I have to say I was exhausted, but very pleasantly exhausted. There were 15 attendees, coming from as far as Michigan, Wisconsin, and Colorado.

This year's camp was organized by Chad Moore and David Prather. They did a super job and really worked hard to put on a professional camp. Both Chad and David know a lot about soaring, and Chad is something of an expert on meteorology. There are a lot of varied topics in the camp, but the core of the camp is learning how to do the math surrounding cross country soaring and then applying these rules it in a controlled environment, where you feel comfortable "pushing the envelope" a bit. Attendees are separated into groups of 2-3 which have about the same skill level and glider performance. This small group then flies together with a "lead pilot." Our lead pilot was NCSA member Dick Horn, who did a great job of shepherding us around. Especially on a blue day, it really helps to have a more experienced pilot along judging the safety of the situation, and maybe even marking a thermal for you. Most low-time pilots are (rightly) pretty conservative about glide angle. You have to get used to being an honest 18:1 away from pattern altitude. This can be a bit unnerving 10nm out. It really helps to have someone like Dick Horn along to double-check your assessment. Also, 3 ships working together have a much better chance of finding a thermal than one pilot in isolation.

Gradually, you begin to feel more comfortable being a ways out from the airport. Finally, you suck it up and make the jump to flying local at the next airport, and then the next, and so on. Since airports in the Nevada basin are spaced about 20 miles apart, this means having to get to 12,000 feet to make the hop to the next airport. Since Air Sailing is a lot easier than Truckee to get back to at the end of the day, there is a lot less pucker about a $150 retrieve or a fire drill with the glider trailer. So, in a lot of ways, the XC camp lowers a lot of the barriers which keep pilots like me flying local and gives you a chance to step out.

Another big learning experience, at least for me, was dealing with the airport topology. The 2 runways are mostly dirt and are significantly up/down hill (!?) I had never landed on dirt before, never took off with a serious tail wind, and never landed uphill or downhill. Also, I had never really flown any serious ridge before. The first day, it looked like tow pilot Charlie Hayes wanted to run me into the side of the Dogskins Mountains, so I figured my time for ridge flying had just arrived.

If you do end up going to the XC camp or the companion Thermaling Camp (usually organized by our own Rolf Peterson) here’s a little check list of things to consider.

Personally, I can’t think of a better way to spend a week.