On Saturday, May 2nd I was given the opportunity for a mentoring cross country flight with BASA member Kurt Thames as my coach/mentor.  Kurt flew back seat and I flew front seat in the BASA DG500 N505KM.  As this was my first XC experience in a glider I asked Kurt to do most of the flying, although I did get about 2 hours stick time on our 5-hour duration flight.  My goals were:

2.       Experience flying the convergence line that everyone talks so much about

3.      Observe an experienced XC pilot from the second seat in a dual glider to understand his thought processes as the task progresses (decision making in the moment)

All of my goals were met and exceeded on this flight and I cannot thank Kurt enough for sharing this flight with me and for his expert mentoring.  He even threw in some added experiences that I was NOT hoping for such and being in the real situation of having to commit to an out-landing at two different airfields and a last minute save at 750’ AGL from an airstrip that would require a ground retrieve.

The day started out at the Hollister airport around 9am with everyone rigging their gliders followed by a weather briefing/task discussion at 10:30 with first tow set for around 11:30. There were eight gliders to be launched and three tow planes to help launch the fleet in rapid succession.  Ramy went first to help sniff out the conditions for the following launches.  Kurt and I launched in the BASA DG 500 (5KM) at noon and took a high tow to Release Ranch and let go at 6,200’ (the standard Panoche tow from Hollister).

The day was blue with no clouds to mark the areas of lift.  We pointed in the general direction of EL1, though a bit to the East since that is where the convergence was forecast to be, and off we went.  Kurt pointed out landmarks and gave me pointers for finding and staying in the convergence.  We kept heading for the high country seeking out the convergence and thermals that would get us the energy we needed to press on.

We found random thermals and areas of sink that kept us from making rapid progress on our goals.  The thermals got us safely over the Panoche valley where our next objectives were to the East of EL2 and then to Buck Peak where we found another good climb.  However, as we were finding out the lift was maxing out around 7,000’ to 8,000’ which, in addition to the day being blue, was not ideal for a long cross country flight.

At San Benito Mountain we hit several areas of sink and just could not connect with the lift we need to press on any further.  We decided to back-track to try and gain enough altitude to keep going further South but kept going down.   At EL4, a usually reliable lift location we found nothing and kept back-tracking and going down.  We though we found a thermal on a ridge over a trail and curled into a tight turn over some hikers.  We were so low on that ridge as we circled that we could have taken a selfie and gotten them in the picture.  The look on that little girl’s face was priceless.

That ridge was getting us nowhere so we headed down into the valley toward Rockies.  Still losing altitude we lowered the gear and prepared to land.  Then at 750’ AGL Kurt rolled into a thermal and made the first save of the day.  That thermal topped out at around 7,500’ and off we went back onto the Benitos and headed further South.

We made it to EL5 and again found nothing.  Seems like the reliable lift sources were just not working, perhaps due to the winds coming from the South, but in any case we kept pressing on.  Our path took us to the West and then North of Wright Mountain and then we found a good climb at the microwave towers and were able to then connect with the convergence and press on.

The convergence took us somewhat south of the Harris Ranch airstrip when Kurt noted that it was almost 4pm and time to start heading back.  The problem was that we were now on the East side of the hills and below glide even to get into the Panoche valley.  We hunted over the flatlands East of Highway 5 for fields and dust devils kicking up thermals to help us home and barely maintained altitude with thermals maxing out at around 4,000’.  As we made slow progress up Highway 5 we found a stinky thermal over the cows at 3,500’ that got us high enough to press on North towards Cotto with the plan now being to land there for a ground retrieve since the tow pilots had all left for the day.

Radio chatter relayed that other pilots were also struggling on the flat lands South of us and just as likely to land out.  This is where I saw the “never give up” real conviction of these cross country pilots come out as well as the whole group of gliders helping each other out with advice on where to go to find the lift they would need to get home.

We found another thermal South of Cotto near the gap into the Panoche valley that got us high enough to cross the hills and off we went.  Then just as we were passing through the gap we hit the best thermal of the day for us.  It started out weak at 2-3 knots and the higher we got the stronger it became.  As we passed through 7,000’ it built to 8-10 knots and eventually took us the 9,800’ and gave us safe glide all the way back to Hollister.  We called out our thermal to the others and led the way home.


Finally we could relax and we explored the convergence line over towards the East Ridge and go the chance to do some sightseeing and add to our OLC points for the day.  We cruised in convergence lift to a bit North of Hollister where we decided to finally call it a day after 5 hours in the air.

The days ended with everyone making it safely back to Hollister and no landouts.  The gliders were put away for the evening and we headed out for a celebratory group dinner at “Relax Grillin & Chillin Burgers and Beers” just outside Hollister on highway 156. 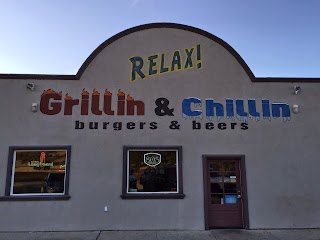 This Hollister League day was a huge success and shows just what can be accomplished with cooperation and mentoring of the XC pilot community.  It was a huge success for me with some more personal bests and was a fantastic learning experience.  I am now looking forward to the Panoche Glider Palooza at the end of the month, having now experienced flying the Benitos with the expert mentoring of my XC coach, Kurt.

Our flight trace can be found on OLC at:

And a view of the flight using Google Earth is shown below.  However, none of this truly captures the adventure that I shared with my fellow pilots on this very special day.