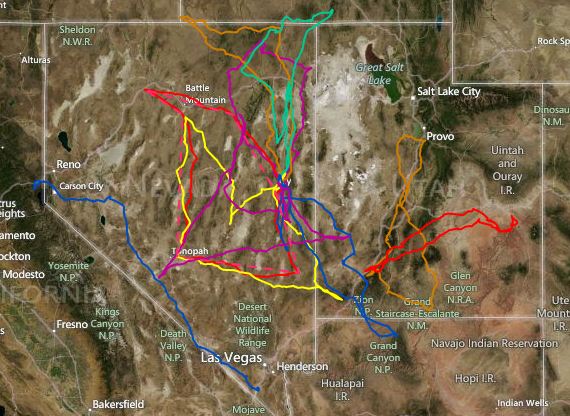 On Saturday (11th) I flew N8579 to Truckee for a day of soaring. This
would be my first day of "real" Truckee soaring, after Larry checked
me out two weeks ago.

The day in San Francisco was clear and sunny. I planned an 8:30 take
off and 1:45 enroute, but driving down the peninsula towards San
Carlos I could see a fog bank to the south. It looked shallow -- tops
around 2500. Sure enough, KSQL was firmly in the fog, with the ATIS
saying 600 overcast.

KSQL is on the shore of San Francisco Bay. The CA/NV high-resolution
satellite image Buzz had posted (*) showed that the fog was confined
to the bay, and Sunol Pass was clear. If I could get out, I could
climb above the fog before crossing the bay. Finally at 9:30 the fog
had retreated a few miles south of the airport (but Sunol Pass was
still not visible), so I fired up the engine and asked for a
southbound departure. "The field is IFR, say intentions." Surely
you're joking! The sky was clear and blue and the sun was shining.
"Ok, request Special VFR." When I got to the run-up area, "579, a new
ATIS will be coming out and conditions will be VFR. Do you still want
that Special?" Sometimes I just don't understand controllers.

The Class B floor was at 4000 above. The Citabria was climbing better
than 1000 fpm so I was at 3500 well before Palo Alto. The tops were at
2000 but I had to continue south to Stanford Stadium before turning
left, to pass directly over KPAO: Class B to the left of me and Class
C to the right of me. Then a step climb under the Class B to 9500, my
final altitude. The rest of the flight was just scenery viewing and I
landed at KTRK at 11:15. After I parked the airplane I realised why it
had been hard to taxi in -- the tailwheel was flat. NOOOOooooo!

Time to worry about that later, now's the time for soaring. I got 81C
ready, and after waiting a bit for all the contest gliders to go, I
launched at 1:00. Applying a principle from Thermal Camp, I had
decided that above 8400, I would pull the release if I saw 10 kt for
more than 2 seconds. At 8200 the needle pegged: close enough! By the
time I released we were already at 8300. I continued climbing in a
right turn; it took concentration to stay in the lift and to try to
center it. (I remembered at Thermal Camp the instructors and some
experienced pilots saying thermalling is the time to relax, eat a
sandwich, and look at the chart. Ha!)

I got up to about 12k before I fell out for good, or it died, or
something. Oh well, time to go hunting for more. I headed for the bare
rocks near Frog Pond and after some fierce sink, connected with a nice
8 kt. Staying in lift was much easier higher up, and I remembered
reading that too. Soon I was passing 12.5k so I started the 30 minute
countdown. O for a working oxygen system! Pretty soon I was at 14k,
time to leave the thermal and fly around for a bit taking pictures.
There was some very impressive looking overdevelopment over the Carson
Valley. After I got back to 12k it was time to go searching... and up
we go again! It was much stronger that time, and I could see a Cu
forming above providing some nice shade. At 14k I had to open the
airbrakes and push, but the lift seemed endless.

Finally it was 1:45 and my 30-minutes were up, so I popped the brakes
and went back down. I flew around at 10k for a while, and everything
was going up. Damn, I'd promised Kit I'd land by 2:30 so he could get
some flying in too. I finally found some sink and circled down, and
was on the ground at 2:15.

Now back to the flat tyre... The folks at Soar Truckee were very
helpful. The Citabria and Pawnee use the same size tailwheel so they
were hopeful, but alas, they didn't have any spare tubes. A very
helpful gentleman named Bill Shields even carted the compressed air to
inflate the tyre just in case it was a slow leak, and then took me
over to the FBO on the other side of the airport to see if they had
any tubes. After that I started calling around at all the FBOs in the
area, and finally, SoaringNV happened to have a tyre and tube of the
right size! Luckily my girlfriend had driven up (she isn't ready to
ride in a small plane yet), so the next morning we took a little
road-trip to Minden. There I happened to run into Mike Schneider, who
commiserated and welcomed me to the joys of airplane ownership. He
also told me about the fierce thunderstorms of the previous day.

Then back to Soar Truckee, where Bill Shields taught me how to change
the tailwheel tyre and tube as he did it. He used to own a Citabria
some years ago, and told me about things to look out for. I then spent
a little time helping out on the line, and then back in the air for
the quick 2:00 flight home at a stately 90 kt.

Thank you Soar Truckee and Soaring NV, and special thanks to Bill Shields!


* High-res CA-NV satellite image -- Buzz posted this link to the list
a few months ago:
http://www.nrlmry.navy.mil/sat-bin/display10.cgi?SIZE=full&PHOT=yes&AREA=pacific/eastern/sierra&PROD=vis&TYPE=ssmi&NAV=epac_westcoast&DISPLAY=Latest&ARCHIVE=Latest&CGI=epac_westcoast.cgi&CURRENT=20120811.1415.goes15.vis.x.sierra.x.jpg&MOSAIC_SCALE=15
No comments:

My first 5 hr solo "endurance" flight from Minden
The initial plan for Saturday, July 28 2012 was to get used to longer
solo flights along the Pine Nuts and around Minden Valley. However, the
soaring forecast was better than expected, with predicted ceilings at
17.300ft and lift in excess of 10kts. Particularly good forecast was for
south of Minden, along the Sierras. Around 11 am, a lot of pilots were
getting their gliders ready and staged them at the apron of rwy 30, like
birds on a wire waiting for the signal that the lift is good over the
Pine Nuts which then they use to jump further south. I spent most of the
morning with folks from Soaring NV and Mike S, figuring out which
official IGC recorder to use in case I have something to claim at the
end of the day. After multiple tests, we settled on the Cambridge
GPS-NAV that is already in KP, our G103 that is flying out of Minden
during the summer.
I was getting ready to launch around 1pm, and Mike S who had agreed
to be my official observer, said "See you after 6pm!" The tow towards
the Pine Nuts was 7min, and I released at 2900ft AGL. On tow, we were
mostly going through the sink in the valley - even Mineral Peak, a hill
in front of the Pine Nuts, looked high. But, there was one promising
thermal, and once I got off, it took me up to 12,500ft right away;
hopped to another one also around 12,000ft but closer to the ridge, and
that felt like a comfortable altitude and proximity to jump to Pine Nuts
and search for some stronger lift. It was mostly blue until now, but
little clouds starting forming over the Pine Nuts. They were growing
fast, and very quickly there was a nice and high (>16,000ft) cloud
street that I used to go up and down the ridge. I was hoping the cloud
street would extend further south towards the Mt Patterson and
Bridgeport, but no such luck. The furthest south I got was Topaz Lake.
Still, the lake is a very pretty sight and a good motivation to hang
around there for awhile. The first 3.5 hour I spent more-less yo-yoing
along the ridge, with one longer foray around the Topaz. Most of that
time was spent at a lofty 15-16,000 ft.
One thing that I have not witnessed before, even though I was told
about it many times, is the strength of the thermals under the clouds
that are just forming. Since the cumulus clouds on that day were
recycling fast it was very easy to spot a wisp of the cloud that is
being born. Those thermals pegged the variometer at 10kts, and in those
2-3 minutes it took me to reach the cloud base the cloud was already
fully formed - huge and mature and dark all of sudden above my head
offering a shade. Later in the afternoon the lift was dying; as I was
struggling to find the blue thermals along the Pine Nuts, the altitude
was dissipated and eventually I had to go back into the valley. I was
already past 3.5 hours in the air, and was hoping to find nice thermals
in the valley, as they do often show up later in the afternoon. I needed
those if I wanted to claim 5 hr duration. Alas, the best I found was the
band of zero sink, looking like the convergence setting up, but not
really. At 4 hours into the flight I was down to 6200ft, getting ready
to make the call that I am about to enter the landing pattern for rwy
30, when a 4 kts shy valley thermal offered itself on the 45 deg entry.
It was quite hard to climb in it; they are very narrow that low. As I
gained 200ft on one side, I lost a 100 on the other side. But, it did
mean staying up. That was a challenging hour and 20min, but at 5h and 12
min into the flight and from 7500 ft I was ready to open the spoilers
and get down. The total flight duration was 5 h 19min, and with 7 min on
tow, I had 12 minutes to spare over the required 5hr. The highest I got
that day was little bit over 17,000 ft.
Well, needless to say, I was quite happy for the rest of the day,
and still brag about it to strangers on the street. The Cambridge logger
has already been calibrated post-flight, and hopefully the badge dude
will not find anything obscure as a reason to reject my claim for 5 hr
duration leg towards the Silver/Gold badge. But no matter what, this
first 5 hour flight for me was a great experience. Many thanks to Mike S
for all his help so far and for being an official observer.
No comments: