Back in the day the pilots would deliberately fly into clouds without gyros. Yay!
They also deliberately triggered thermal bubbles at low altitude by diving and maneuvering at about 200 feet. No wonder they died like flies.

Buzzard readers might want to know that West Wind pilot Wilbur dropped in for a social call to NCSA clubhouse this AM. 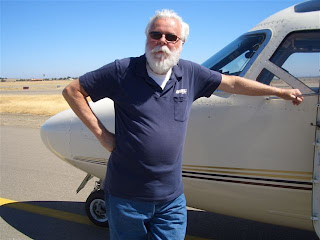 He showed me his jet and said it was really very easy to fly. 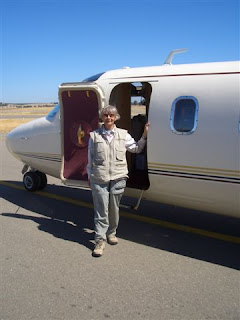 Ask Shannon how his landing was...

This year it was the turn of NCSA to host the Annual Truckee Bash.
By custom the three clubs who fly in Truckee rotate the event. 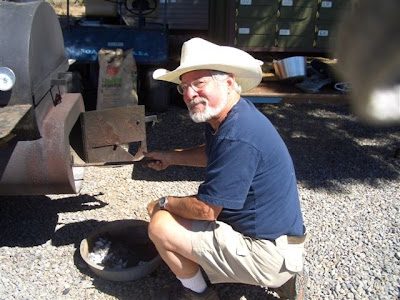 Richard Pearl showed his Chef's credentials, and brought out his giant smoker to Truckee to feed 84 people on Saturday July 21st. The feast was first class, per Richard's reputation! 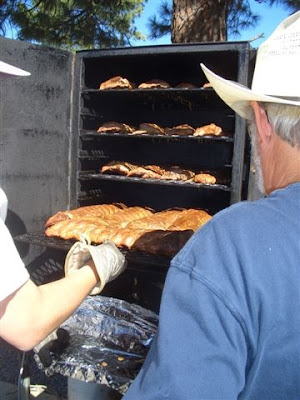 The highlights of the menu were Richard's delicious smoked ribs. 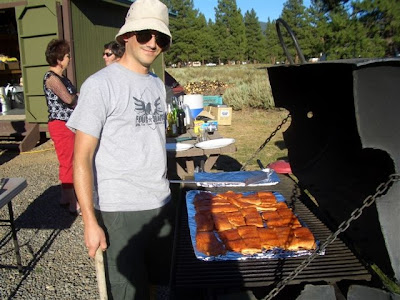 The barbecued salmon, prepared to perfection by Ben Hirashima, was good too. Ben is a pro at the grill.
What a sumptuous Banquet! 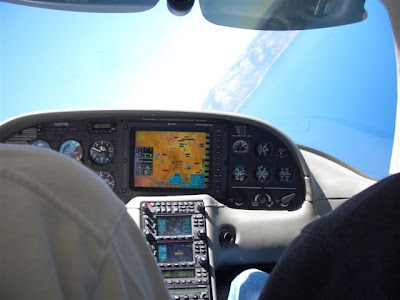 About 18 NCSA club members attended the bash, including several private glider owners and two students (Norman Leung, Eric Nelson and friend) who were flown in
by Thomas Daniel, one of our Tow Pilots, in his Cirrus. Check out his glass cockpit above, as he demonstrates a steep bank over Lake Tahoe. 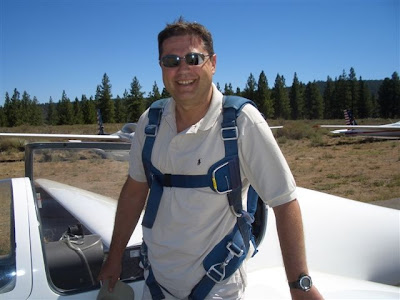 After landing his Cirrus, Thomas took the opportunity to refresh his glider skills with a flight in 81C. 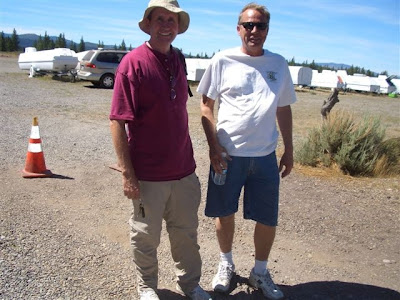 We also had the pleasure of seeing one of our former club members,
Irv Powalka, who drove in from Southern California to get reacquainted with old friends, such as Willy Snow.

During the Bash weekend and the next, many long flights were flown: 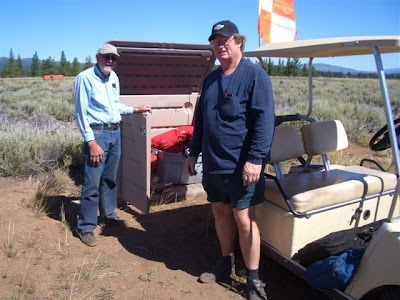 The afternoon before the Bash, Ken Ferguson and Bill Levinson decided to move our storage container to the other end of the tie-down area, to be closer to our 2-place gliders. 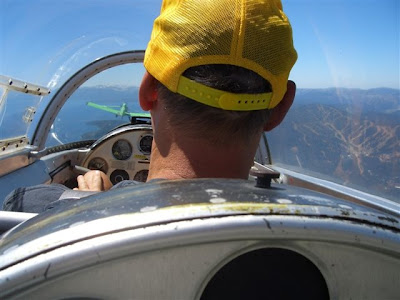 Also, the day before the Bash, the highest tow I have ever experienced in Truckee
was requested by a potential Trial member who wanted a long tow to sharpen his tow maneuvers and turns on tow. Here is Paul Pencikowski on tow in Blanik AS above 10,000' on the way up to 11,000' before releasing from Pawnee 6Z near Mt Pluto.
It's best not to ask the cost of the tow. 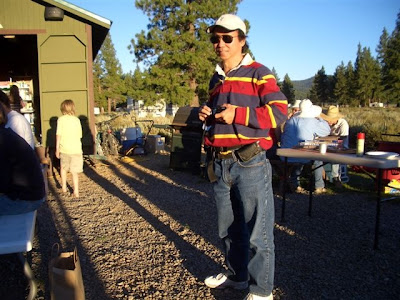 NCSA's newest club member, Norm Leung, was apprehensive before the flight with Thomas, and sought assurance that the pilot was a safe pilot. Here is Norm, after the Bash, preparing to fly back in a sunset flight. He emailed back that they landed back in
Palo Alto just after dark and that the Cirrus was well equipped with advanced instruments for night flight. Norm was relieved that Thomas was a very experienced pilot. The flight
was a treat both going and returning and was very comfortable for everyone after all. 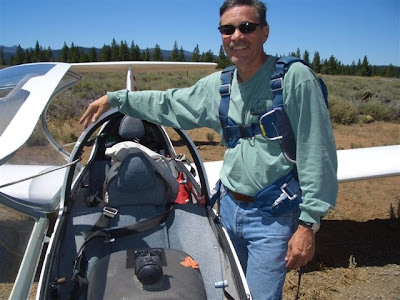 The next day, several club members had flights in the Grob, including Bill Gage, while the NCSA Board meeting was being held; and later,
Mark Violet, is seen here smiling after a two-hour thermaling flight in Grob 81C. 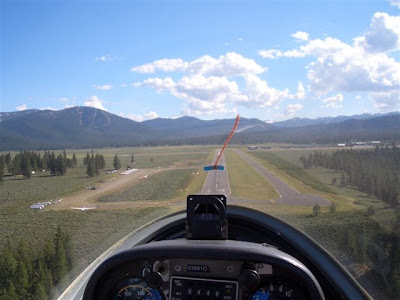 Gliders--Silent Weapons of the Sky, 1944

I have uploaded to the web William H. Nicholas's article "Gliders--Silent Weapons of the Sky" from the August 1944 issue of National Geographic Magazine. (link)

Saturday (August 4th) was a one in a million flight - or so it seemed - thanks to
Jack Glendenning's Blipmaps with the RASP maps for Byron configured by
Dmitry Chichkov.

And thanks to Ramy who asked to share Grob FB for a flight in the
Diablo Range to check out those unbelievable Blipmaps forecasts.
I was not the Byron duty instructor so was free to fly and no one else
requested the Grob, so I found myself at the right place at the right time.

We launched at 2:20 and Dave Stroh towed us to the Diablo Range, release
3 (?) then easily climbed from one thermal to another (not infrequently
10 knot average) to 13,500'. We had an oxygen tank leak so I did not want to
climb any higher; I began to get a slight headache--my initial hypoxic
symptom.

There were some clouds in the morning to indicate the convergence but
none during the flight--there was haze however, which indicated the
convergence zone.
We turned over Pacheco Pass (highway 152), then Ramy suggested we detour
to go over Mt Hamilton (Lick Observatory) which we did, before heading straight
to Mt Diablo. We found a weak wave near the Livermore valley, which
gave us zero sink to Mt Diablo. Total distance covered from release
was 184 KM. Open spoilers were necessary to head for Byron as there was
good lift all over the Byron area. Peter Wilson, the Byron Field
Manager was kept busy all day and will report separately after he has
rested a bit.

Ramy was unused to not having an audio vario or any electric vario (or
PDA or flight computer) just a good mechanical vario that FB has.
This was "Back to Basics" for Ramy. We also had no transponder so I did
all the communicating with ATC--Norcal Approach--We were transferred
to 5 different controller sectors during this 3.4 hour flight. The
first controller was initially skeptical of our presence in this busy
airspace, often referred to as "Tiger Country" by glider pilots, without
a transponder. He asked what instruments we had; "A compass.", was my
reply". Without too much trouble however, he was able to paint our
primary target and all the subsequent controllers also easily tracked
our course. The fact that we were able to locate most of the targets
(mostly 737s) pointed out to us helped smooth out the interchanges. I
think the controllers were a little awed by our climbs--as we were
also. Once a controller told an airliner that we were a
"motorglider", and I didn't contradict him. We were frequently asked for
our altitude and I could sense the disbelief in the pause that followed
our reports of continued climb. The only reprimand I got was when I
mispoke--and said we had the 737 three-mile "dead ahead" (I was
probably a little hypoxic and couln't think to say: "twelve o'clock" -
Controller told me never to say "dead" on the air.) Only once were we
asked to change course and we were given two options: to turn north or
south. Ramy chose "south" and our responsiveness to their requests was
appreciated.

What a joy this flight was for me! Ramy said he had never flown higher
than about 10,000' in the Diablo Range before.

Keep checking those RASP Blip maps--who knows what we missed before
this creation.
I hope this flight will spur other club members to explore the Diablo
range when good lift is predicted.

The Westwind Jet Returns to Byron

The Westwind jet we had a close encounter with some months ago is returning to Byron. Here's the letter they sent us:

Hope all is going well for you.

Just wanted to let you know that the Westwind Jet will be going into Byron on August 9 at about 10:30 AM and will be leaving again within a few minutes.

There will be another arrival on Sunday August 11, tentatively scheduled for around 4:00 PM with a departure shortly thereafter.

Position reports and intentions will start being broadcast 10 minutes from landing.

Will advise a more exact time for Sunday when it becomes available. The Byron airport management will also be made aware of the times.

Let's watch out for it this time, and avoid a repeat.

The Vintage Sailplane Regatta will be held at Avenal this year for three days, the October 6-8 weekend. I contacted the organizers recently about going down to have a look, as a spectator. Paul Hanson got back to me, and said pilots without old-school gliders are welcome to attend and fly. I think I may just do that, since I've heard good things about that club. It's the same place that hosted the WSPA Seminar.

And here's a link to the site. They are offering a special $30 club membership for the event. They are also asking folks to register by Septemer 6, presumably to make the planners' jobs easier. 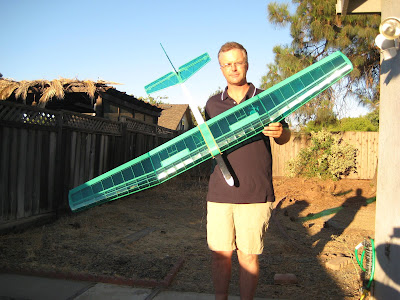 I've just completed a side project 2 meter R/C glider that was started on a rainy winter night some months back. Sometimes you just have to take a break and let your creative juices flow. I always wanted a model glider with spoilers so midway through the wing build I decided to steal a few ideas off the web. My cable operated spoilers work quite well. I have a number of flights on it now, mostly at the East Bay Radio Controllers field off of a Highstart(bungee) type launch. That gets me about 200 feet or so. Caught some nice thermals coming up off the dark runway that helped sustain my flights. 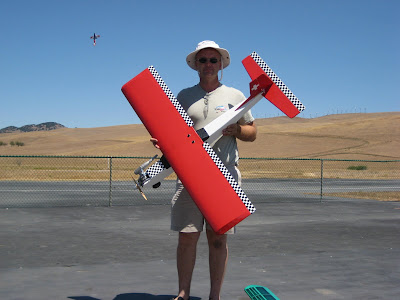 During this time I also dug my 25 year old Bridi trainer out of my parents' attic and completely rebuilt/recovered it. Flew it for the first time since 1983 this weekend. It was like visiting an old friend. It flew just like I remembered(maybe even better), except my teenage knees werent knocking this time. Life always seems to bring us full circle, just enjoy those moments of yesteryear as they pass by.