This was a great day for local soaring and my first day flying with a little gaggle of 4 other gliders circling in the same area.  Launched pretty late in the day with Mr Randazzo and released at 3,500' over the Vaqueros Reservoir.  There were a few little wispy clouds with some 2+ knot climbs underneath them.  Found a few other gliders in the area and circled while being blown downwind toward Vasco Road.

After feeling like we were topping out around there around 3,800' we followed KP(?) south and ended up working an interesting growing cumulus (see Dmitry's pics) with some solid climbing underneath and along the northwest face of it.  It was here that we had 5 gliders (including us) circling around and it was nice to have another pair of eyes in the cockpit for my first gaggle!
We topped out around 4,000' and a had a little flyby from Ramy.  With Peter calling on the CTAF "sunset is in 30 minutes, don't land in the dark" there was general motion back to the field.  With the sun almost setting behind the mountains the pattern was starting to get crowded!
KP was giving regular position reports to the Elevator and it looked like we in 81C would be the first to land, on 23.  We were at about 2,500' and heard a call from Dmitry that he was in the pattern for 30.  A few more calls back and forth and it was clear we were going to be a little close, with Dmitry landing first.  Dmitry ended up landing on 23 and I was on final for 23, quite high.  John called out "81C is making a 360 for traffic separation. On final for 23".  I did a 360 and ended up at a better altitude and giving Dmitry more time to clear the runway.  We landed uneventfully and made the first turnoff.  With my altitude in a similar situation in future I'd probably extend my downwind to give more separation (I had been holding more altitude once we heard Dmitry's calls).
Great day!  Thanks to all for making it happen.  Lots of smiles from everyone after they finally came down :)


It was great to see 5 private ships and 2 Grobs flying today. The day turned out as promised but after a slow start. After calling a good day I was ready to put my glider back in the trailer at 2PM and hide when everyone who launched landed back shortly due to a mix of stratus, high clouds, blue hole and rapid cycling clouds with no lift. But shortly after 2PM the wind suddenly shift from 23 to 30, which resulted in a nice shear line right over the airport extending between mt diablo and Tracy. Good climbs averaging 5 knots to around 5000 feet, with wavelet to 6500 feet or more downwind of mt diablo.
Tomorrow might still be soarable but drier. 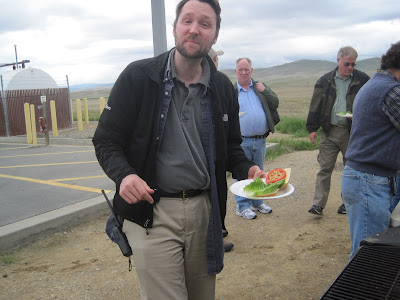 A few words about myself:
I have wanted to be a pilot since I got my first set of plastic wings
from TWA. Through my career, I've flown as a commercial passenger for
hundreds of thousands of miles, and the airlines have been unable to
beat the love of flying out of me. I took up soaring on the advice of
a friend, who said "if you want to actually learn proper use of the
rudder, start by flying gliders first." I don't have a concrete goal
joining NCSA, except that someday I'd like to combine flying with my
other hobby of photography. It's hard to imagine a taller tripod than
in the wave.