I joined Kempton Izuno on an attempted 1000 km flight out of Williams, CA this past Saturday August 10th. As most of you know, Kempton flies far, long, and in his 60:1 ASH 25 often enjoys an up close tour of the terrain below. Here’s our story of the flight.

Alex Neigher recently completed a stunning 1002 km flight with Kempton also out of Williams. Alex’s writeup goes into great detail and I encourage you to reference it for a deep dive into an impressive flight. https://medium.com/@alexneigher/kempton-alex-fly-1002km-494ea80c91d2

Quick notes, for those on the go


Sunday, August 4th - San Francisco
Forecasting started the weekend prior. There was a forecasted cold front with possibly the perfect amount of moisture and strength to setup an interesting, and infrequent, weather pattern across Norcal, northern Nevada, and Oregon. The theory was the cold front would have enough strength to push out dead summer air over CA/Oregon and create great springtime type post-frontal conditions in that area, but not have enough strength to push into the Nevada higher desert where strong summer conditions would be in effect. 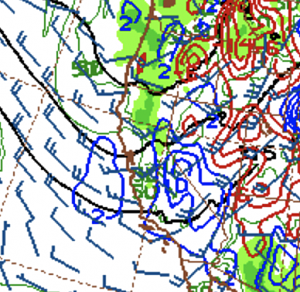 In preflight planning, we covered a possible task. Kempton drew out this nearly tri-state triangle (purple). My only time north of Sacramento was a one time drive to Shasta, Eureka, and back. I thought I was familiar enough with the area to understand the scale of this attempt…. 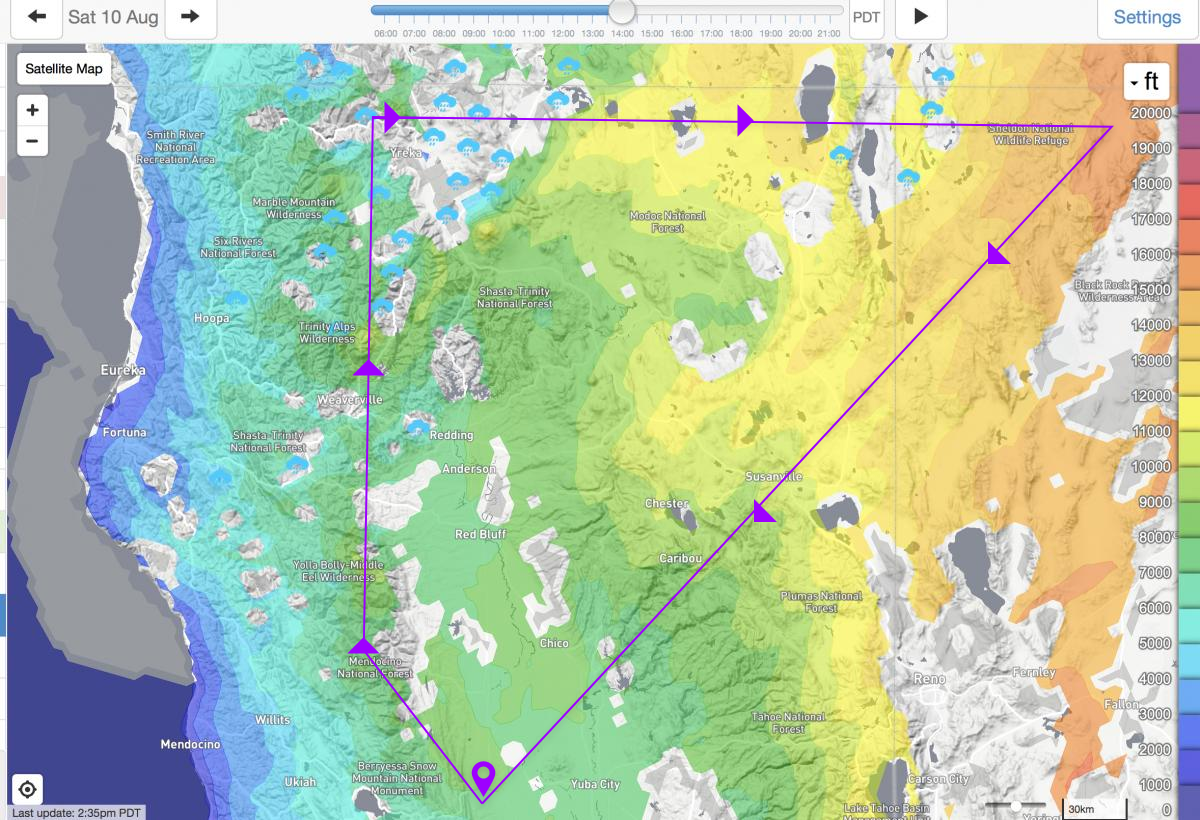 Then, I noticed Lake Tahoe, and mentally overlaid my flights. Here, I’ll overlay a OLC-certified flight path of my longest yet XC (red). 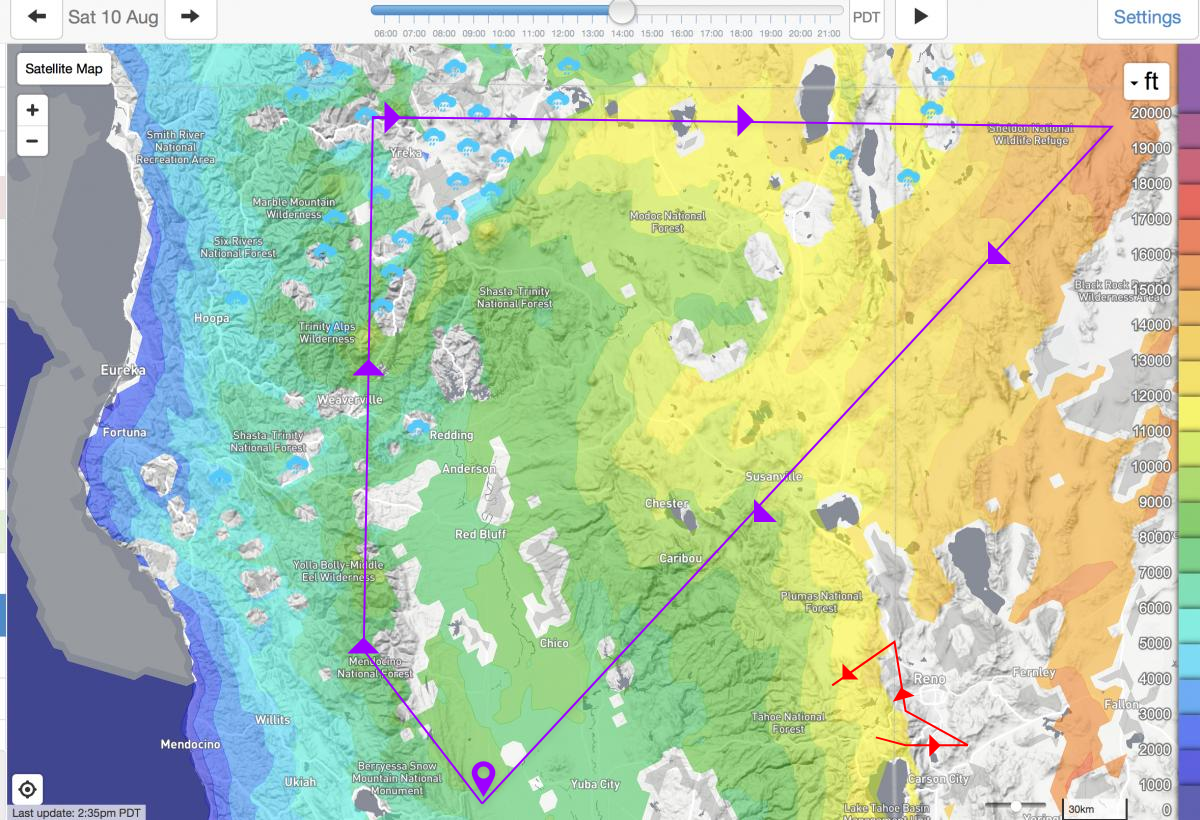 My longest flight yet, red.

Now for you astute map readers and graduates of geometry class, you will notice my flight did not come back to where it started. That’s not because I love the Sierraville hot springs so much, but because this was was going to be my longest solo flight by a lot had I finished it back to Truckee. Let’s just pretend I had made it back to Truckee, okay?

Once I understood how vast Kempton’s task was, I knew I was in for a special flight if the forecast came true.

However, Forecasts always have unknowns. Our unknown was just how much moisture would accompany this Goldilocks cold front. Too little would of course make difficult stretches of blue, but if you’ve noticed the light blue rain clouds above that was not our concern. Our concern was over development, and specifically not being able to get to our NW turnpoint before overdevelopment happened (aka rain, for the glider-uninitiated). We figured the race would be on, so start early.

If we got our early start and cleared that NW turnpoint, it’d be around lunch time and we’d ride glorious rising cloud bases into Nevada, hit the NE turn point, and get final glide from FL350, uh, I mean work our way along a NW headwind from high terrain back down to the valley. Towering cu’s seen to the north while on tow. OD likely to block our northern route.

We awoke and saw more leftover moisture from the front than anticipated. Stagnant clouds burned off as new cu’s quickly began forming over the mountains. We launched.

With a clear view on tow we saw a huge deviation from the forecast. Towering cu’s due north at 9:30am…. This was not a good sign for the northern task.

However, the atmosphere is a dynamic thing and with the moisture delivery having passed it was still worth a shot to see what we’d find by the time we made it further north via bumping along cloud base over the mountains. Westbound out of the valley from Williams.

Bump along cloud base over the mountains at best glide he said. Well, with the clouds that low over terrain this was going to be interesting. I had flown with Kempton in this 60:1 ship before and knew we’d be sightseeing the ridges up close.

With Kempton’s immense local knowledge of the typical lift spots, land out strips, and importantly valley exits - we headed in.

Kempton immediately brought to bear his significant cloud-analyzing knowledge. We hunted for puffs, scragglies, shelves and more. Shelves turns out are small lines of convergence indicated by a shelf shape to the cu base - dramatic, abrupt changes in cloud base altitude making a single step of a staircase sharp gain in height. See below. 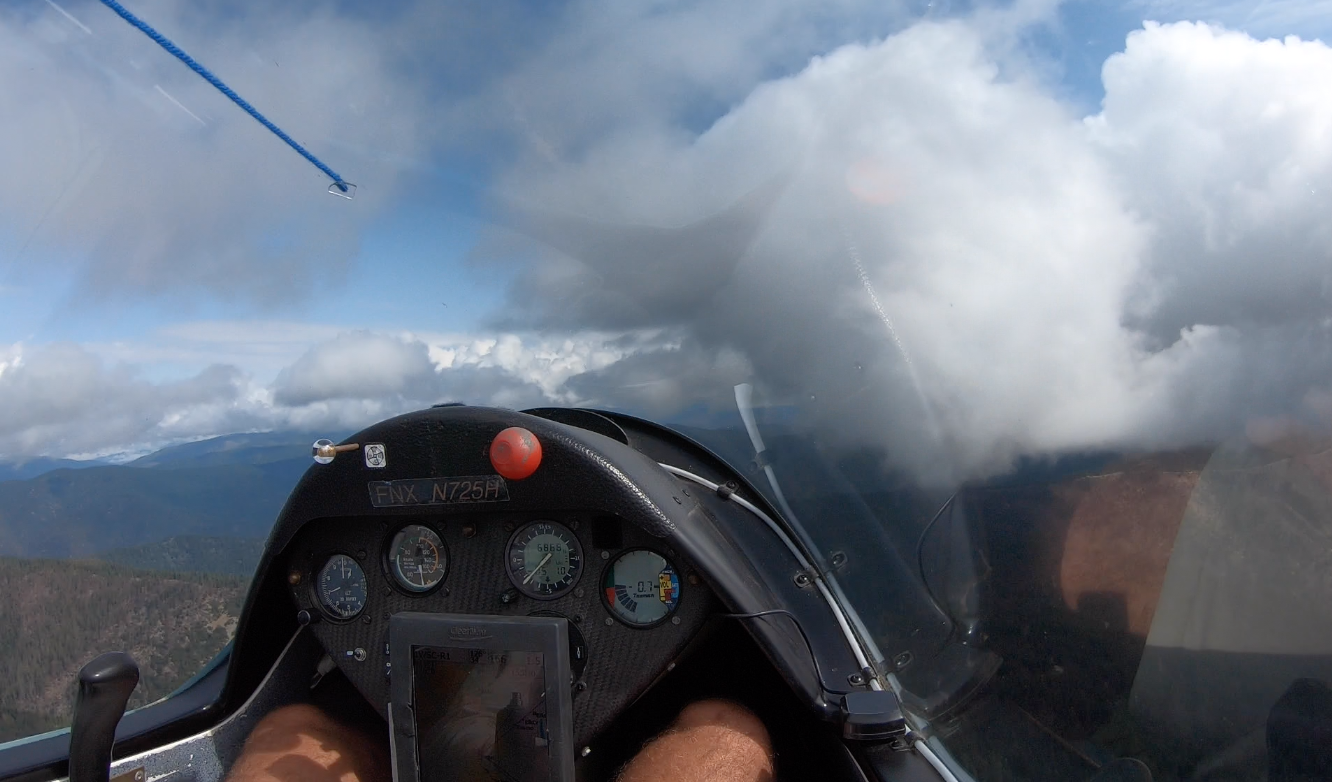 Shelf off the nose, ascending from R-L. Fly tight under the high side.

Flying in these low clouds was still early minutes of the soaring day. Lift was 1-2 kt average, and cloud base was nearly minimum comfort over the ridge tops, so bump along at cloud base we did. What bumping along at cloud base in a 60:1 ship looks like, note the ground…

I was amazed at how well this was working. The performance of this ship at best glide is incredible. We were making quite a lot of progress under life that should only continue to improve. Success so far!


10:56 am - ~65 statute mi north of Williams
Either the clouds were closing in, or the terrain was rising, but I actually think both. Kempton had stuck to the plan quite effectively, given the narrow slot we were working with. Either the strong development we had seen to the north would be lifting and we’d eek through while dodging rain, or we’d simply be shut down by minimum cloud height above the ground. We eventually were blocked to all points to the north by clouds touching, or nearly touching, the ground. After some amazing attempts to find micro-climbs trying to poke through to the next north-bound sustaining shelf of lift, we conceded that clouds were developing in all directions around us. There was no indication a path would open. We bailed out to the valley under a taller, growing ‘cu. Quitting the task, heading out to the central valley’s edge past over development seen on the right.
Now heading south, our task was dead. However we had still notched an hour and a half of flying and a non-trivial head start to the day on distance. With stronger lift, and far more terrain clearance, we formulated a new plan while flying fast between lift and evaluating our pilot reported cloud options to the south.

It didn’t take long to realize we were still coming into a great soaring day. Southbound past the northern overdevelopment. Williams in far distance to the left.
Nor did it take long to realize further north just wasn’t in the cards for the day. Anvil development directly on our task at about 11:30am.

1:30pm - South.
Fast forward past Williams, past Lake Berryessa and onto between Vacaville and Napa. Clouds were working well but bases were dropping, and so were we. Despite promising clouds towards Byron and beyond, the delta crossing was looking low. Possibly doable, but low even for the 60:1 ship, and further the return and climb back up to Sonoma county cloud bases and beyond was questionable.

At ~2500’ MSL in terrain sight seeing distance and safety airport being Napa to the south nearing max safe glide, it was time for a thermal. Kempton worked his skills for a climb, I took over to head back north, and soon enough we were back at cloud base sitting happy up high passing Calistoga. 3:00 pm - Ukiah
Time to plan the remainder of our ad hoc task. What direction looks good? What sounds fun? When’s the bbq?

We agreed the clouds look promising to the west towards the ocean. Kempton said that’s unusual, and seemed to factor in my love of sailing and kitesurfing in suggesting we see how close to the ocean we can get. Easy yes.

Passing overhead Ukiah, westbound. Ukiah airport lowest right half out of frame. (above)

Conditions were staying solid past Ukiah. Lift was still plentiful, we headed past Booneville. "Go West, young man.” (Below)

West of Booneville the bases dropped slightly. We still had enough working room to head for the ocean. Soon we had the ocean in sight - marine layer fog pushing up against the coast was visible below the horizon. 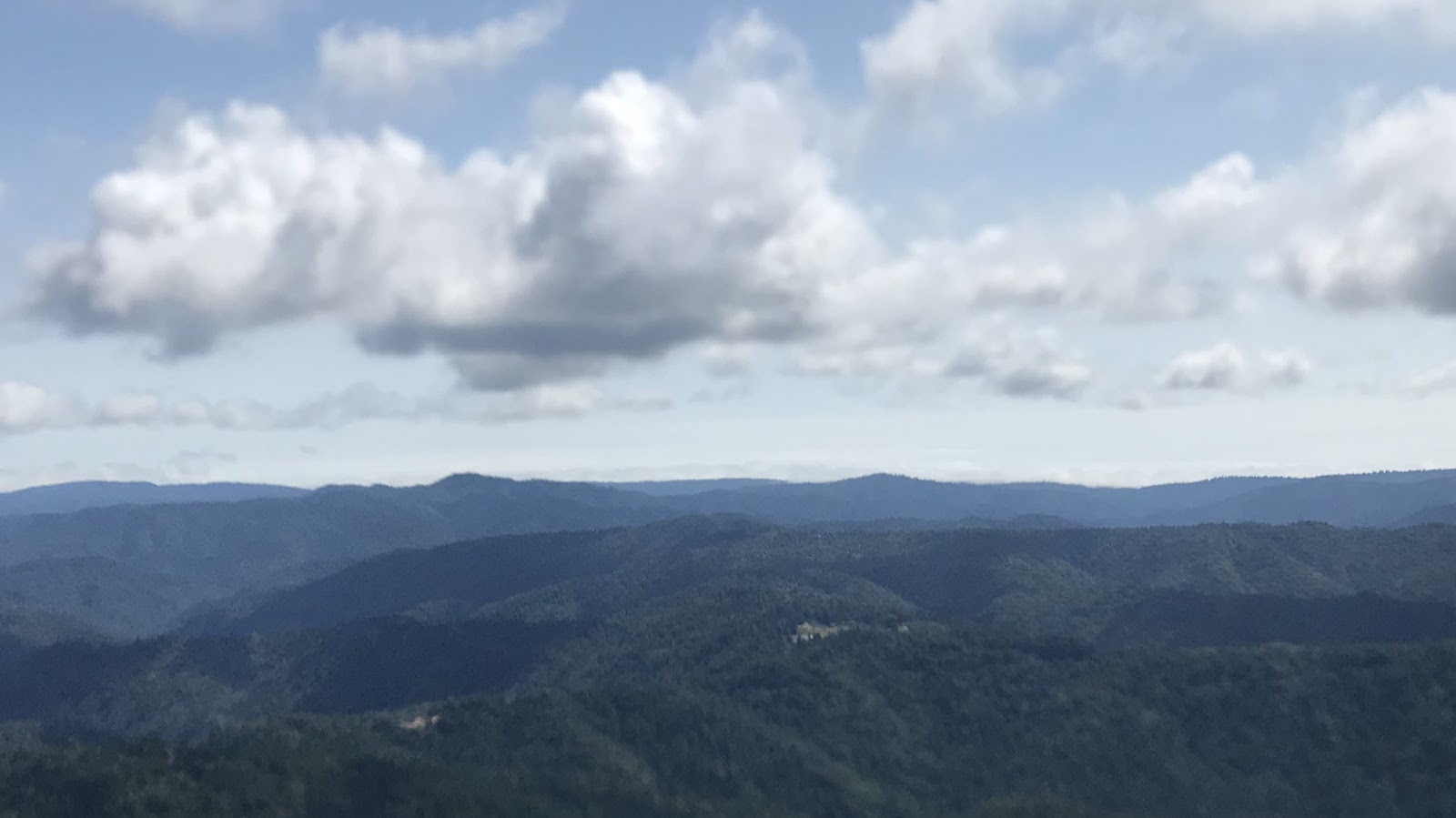 Ocean fog on the horizon.

We u-turned after spotting the coast, and a few minutes later I was at the controls with the view photographed below*. I didn’t quite know for certain exactly which ridge we had to clear to make it back into the Booneville valley. Kempton clarified that we had ~25:1 glide to Booneville, so not to worry. However given he was behind me I wasn’t quite sure he had looked up to see there might be a ridge in the middle of that 25:1 glide. As I saw the ridge move up the canopy while pushing the nose over through some sink, my Grob-glide-ratio-brain was firing that Garmin glass-cockpit alert voice, “Ter-rain! Ter-rain!”. I was not feeling certain about our ability to clear this ridge. I asked Kempton to fly and said I trust him, but that I didn’t want to be responsible for any major speed to fly errors. Pretty sure he chuckled quietly as we cleared the ridge by a ridiculous amount. 60:1 he said. 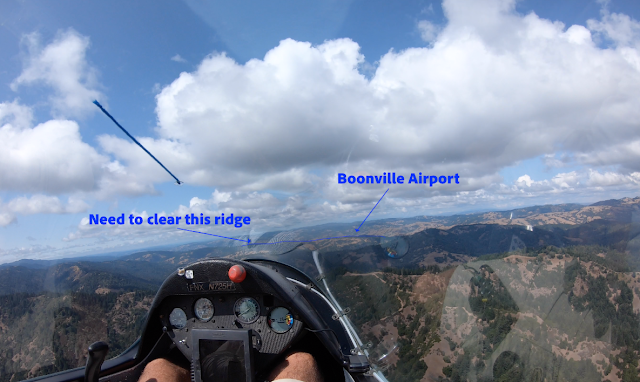 The view back to Booneville
4:30 pm - NE of Ukiah
The lift was changing. Weaker, presenting one last obstacle to making it home. After trying several thermals, we spotted a bird of prey and joined it up to a comfortable height. This gave us access over to Mt. Snow. From this position we tried further north to notch more time and distance, but the lift was not cooperating, and personally at just over seven hours in the glider I was feeling ready for the bbq.


On our final glide I flew us at best glide speed for a sightseeing route past an incredible variety of cu development. We chatted about the marvel of soaring, how we are lucky to live in the first era of humans having 60:1 gliders 🙂 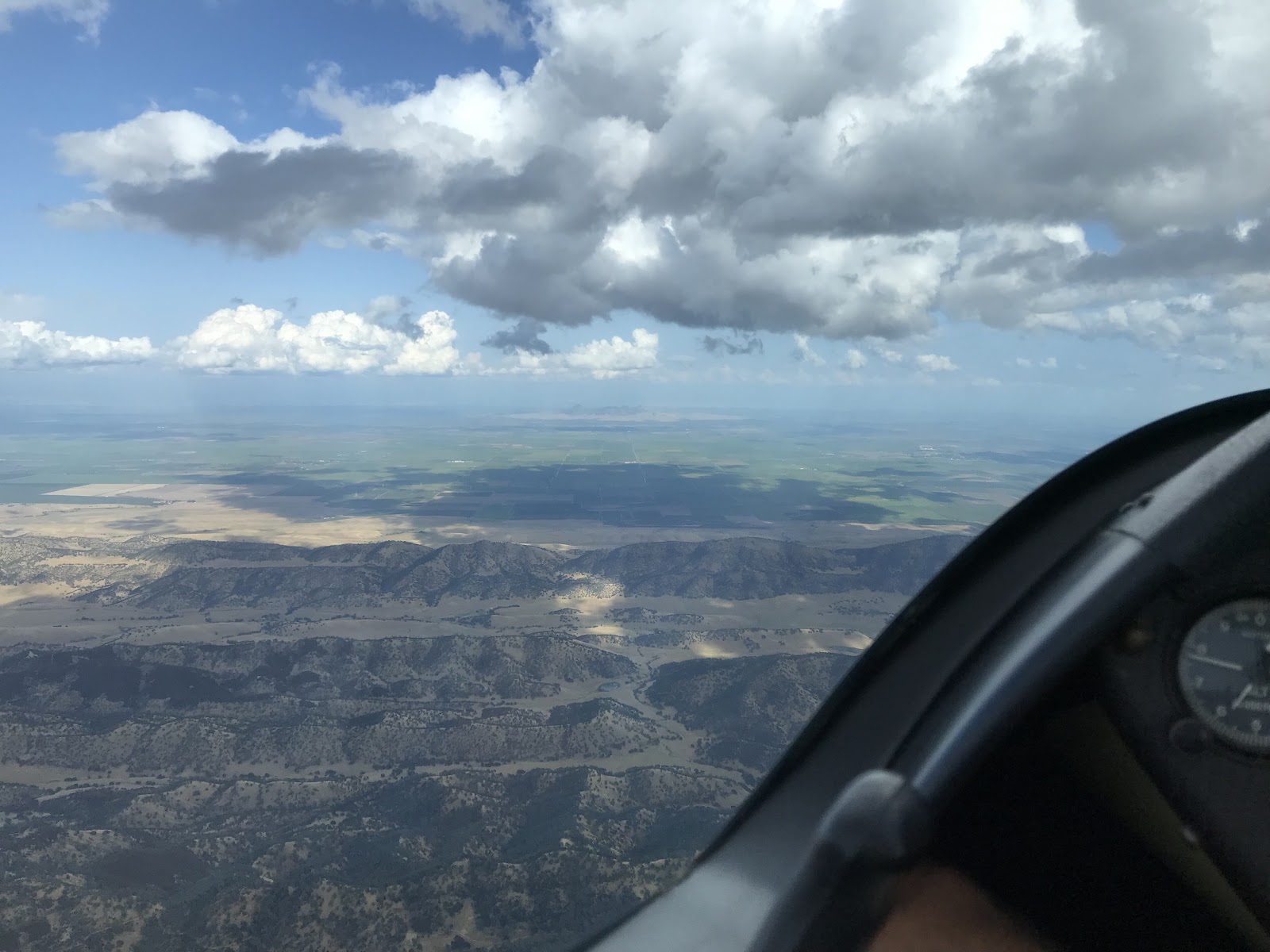 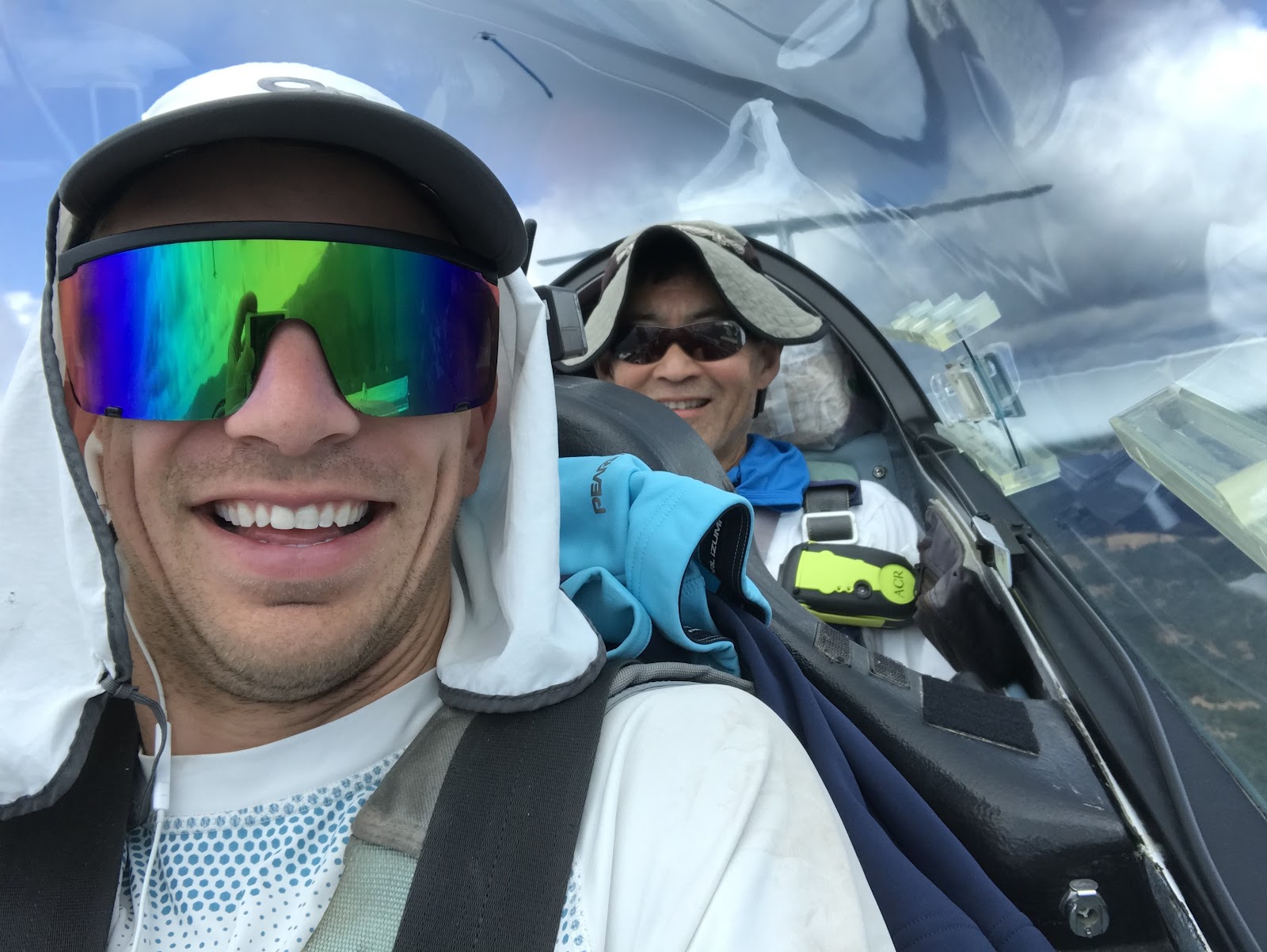 ~5:20 pm - Williams
We landed Williams 0.1hrs shy of eight hours of flying, having covered 570 km. While far short of our big 1000km task goal, we still had a very interesting flight with a wide variety of conditions. I learned plenty around identifying lift indicators, micro vs macro decision making, what a 60:1 glider can do, and overall a lot about strategy of using all available conditions throughout the day to make a great glider flight.

Big XC flights are not necessarily all the high speed, high altitude cruises we like to hear about. Big XC flights are often the patience and skill to search the widest number of thermals as lift is deteriorating at any particular part of the flight - even if booming conditions are spotted just beyond reach. Patience, skill, excitement, good snacks, and optimism to keep exploring a variety of options is what it’s about! Thanks Kempton for a good flight.